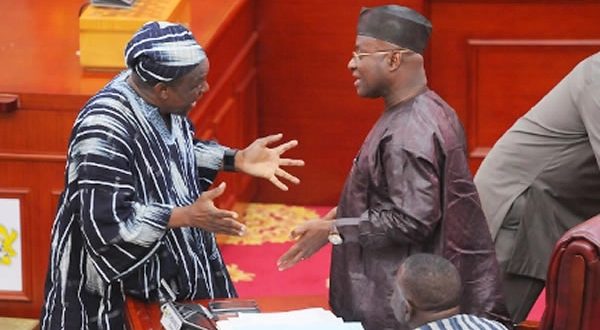 Majority Leader: Speaker’s Ruling On 2022 ‘Agyenkwa’ Budget Has No Binding Effect On Parliament

The Majority Leader, Osei Kyei-Mensah-Bonsu says the Speaker’s ruling on the 2022 budget has no binding effect on Parliament.

According to the Suame MP, the motion for the approval of the 2022 budget still stands in the name of the Finance Minister, Ken Ofori-Atta, despite the rejection by a one-sided House made up of Minority MPs.

In the view of the Majority Leader, the ruling by the Speaker affirming the rejection of the budget is wrong.

“That whole procedure was unconstitutional. As far as we are concerned, it’s null and void and has no binding effect on anybody. The motion on the budget as far as we are concerned hasn’t been pronounced on by Parliament, and it’s still standing in the name of the Finance Minister and in the fullness of time, a properly constituted house, not one presided over by the Rt Honorable Speaker will make the decision,” he said.

The Majority Leader also argued that per the standing orders of Parliament, a decision can only be taken by the House when MPs present are more than half of the total number.

Explaining further, he added that the NDC MPs present in the chamber were 135 and not 137, insisting that the number present at the time of the ruling could not support the decision of the House in accordance with the laid down processes.

“Article 104 (1) of the constitution says matters in Parliament shall be determined by the vote of the majority of members present and voting, with at least half of all members of Parliament present. We have cause to believe that at least 2 of the NDC MPs were not in the chamber and yet out of mischief, the Speaker said that they were 137.

“In any event even if you go with 137, it is still less than one-half of the 275 members of the chamber so when he puts the question, the Speaker should have known that the number would not support the decision of the House. So that purported decision is a nullity and does not have any effect on anybody,” he told the media.

The Speaker of Parliament, Alban Bagbin supervised the rejection of the 2022 budget statement and economic policy after the Majority Caucus staged a walk-out.

Members on the majority side walked out after a disagreement over a voice vote which did not go in their favour.

Listen to the audio below:  Majority leader addressing the media in response to the Speaker’s ruling

I'm Adwenpa-Hene |Blogger & Broadcaster Journalist. I am the CEO and manager of this noble website. I publish on Entertainment, Sports, Politics, Lifestyle, and Technology. You can also follow Us on : YouTube Channel - My Ghana Media TV, Facebook - MyghanaMedia TV , Twitter - @MyGhanamedia2 & Instagram - My Ghana Media TV. Email Address: [email protected] Contact Us: 0200818719
@@MyGhanamedia2
Previous Alban Bagbin To Undergo Medical Review In Dubai After 2022 Budget ‘Rejection’
Next Check The Last Time A National Budget Was Rejected In Ghana