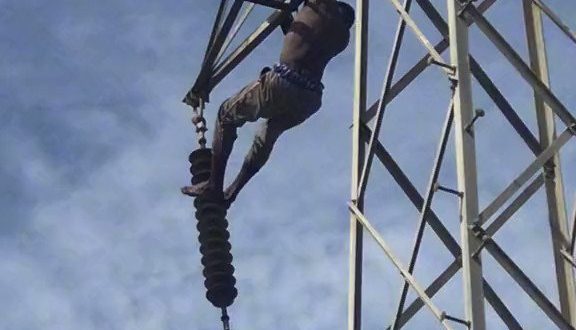 A young man believed to be in his 20s has taken his life on  Friday, 14th October, 2022, afternoon at Kasoa in the Central region.

He is said to have climbed the high voltage transmission line pylon at Galilea in Kasoa.

In a recorded video of the man who climbed a utility steel pole, some bystanders were were cautioning him of the impending danger whilst others urged him to carry on with whatever purpose he sought to achieve.

After stretching his feet to the live cables on the pole, he got electrocuted and fell dead.

Even though the cause of his suicide has not been established, but according to some eyewitnesses, he took his life as a result of the hard economic conditions.

Whilst others were wailing over the misfortune, some voices heard in the video were worried the incident was going to deny them power to sleep tonight.

The body has since been conveyed to the morgue.

GRIDCo owns and operates a network of transmission systems for the distribution of bulk electric power in Ghana, consisting of about 3,670 circuit-kilometers of the 161 kV transmission lines and 34 High Voltage/Medium Voltage substations.

Watch him in the video below:

Men are the most depressed creatures on earth just that they barely show or talk about it but once again, suicide is not an option or the solution.
Talk to someone today, if even you can’t help them, try to motivate them😭😭😭
.
.
.
Kasoa Finance Minister Kwesi Arthur Mzbel Cedi pic.twitter.com/m8PCDfwqCD

Man dies after climbing a high-tension pole at
Kasoa over hardship in Ghana pic.twitter.com/4bQc9zyQpH

This incident happened in Galilea junction, I was standing opposite the high tension begging him to come down, Kofi was his name.#kasoa #Cedi #resign @utvghana @peacefmonline @StatsGH pic.twitter.com/3OLNhVsfBN

Man commits suicide at Galilea in Kasoa. According to eyewitnesses, he claimed he was tired of life and the current state of the economy.
WARNING: Video may be disturbing to some viewers. Discretion is highly advised.#djqwequpromos #Blogger #galilea #kasoa pic.twitter.com/C5e2uVYDjd