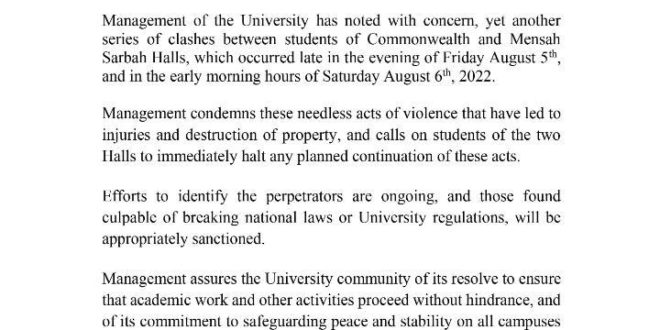 The Management of the University of Ghana has said that persons found culpable in the acts of violence on the University’s campus last night will be sanctioned appropriately.

According to the Management, efforts are underway to identify the perpetrators.

This is in response to an inter-hall fight that ensued between the residents of the Commonwealth and John Mensah Sarbah halls of the University of Ghana last night resulting in injuries and damage to properties.

The University in a statement issued on August 6, 2022, condemned the “needless acts of violence that have led to injuries and destruction of property.”

“Management of the University has noted with concern, yet another series of clashes between students of Commonwealth and Mensah Sarbah Halls, which occurred late in the evening of Friday August 5th, and in the early morning hours of Saturday August 6th, 2022,” the statement noted.

It further called on the “students of the two Halls to immediately halt any planned continuation of these acts.”

Management also assured “the University community of its resolve to ensure that academic work and other activities proceed without hindrance, and of its commitment to safeguarding peace and stability on all campuses of the University.”

An eyewitness who pleaded anonymity said  that residents of Sarbah Hall celebrated ‘Sarbahfest’ on Friday.

Somehow, one of them strayed to the Commonwealth Hall, he was beaten up and his phone taken away.

In the process, a vehicle parked at the Mensah Sarbah Hall car park was set ablaze.

“Besides burning the car, they came to fight, destroyed a lot of things and took away one of statues at the Sarbah Hall,” our source said.