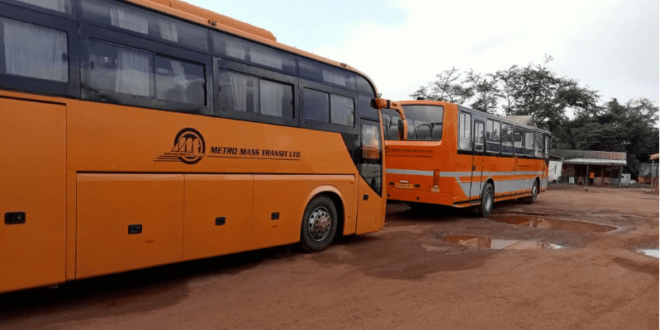 The senior and junior staff unions of the Metro Mass Transport limited have called for the removal of the Managing Director of the company, Mr. Albert Adu Boahen.

The members made the call in an interview after staring their sit-down strike today, Tuesday October 12, 2022, over what they consider as incompetence on the part of Mr. Adu Boahen and his two deputies.

The union lamented the poor conditions of service and the interdiction of four executives of its leadership in four different branches of the country.

According to them, for the past five years no staff has received full salary and management of the state transport company have also refused to pay their tier two and three pension scheme deductions, personal loans and Cidan loan since 2018 to a tune of a whopping GHC350,000.00 meanwhile deductions are effected on their salaries.

The Kumasi senior staff union chairman and one of the interdicted, Ayim Francis Gyampoah said “they make deductions from our salaries since 2017 but the monies do not reflect at the loan, insurance and pension schemes”.

He further noted that after twenty years of operation, the Metro Mass Transport limited have no salary structure, no control of fuel usage and alleged that management of the company uses its own discretion in the sharing of goodies.

“The executives and management of the company use fuel excessively with no control measures and this is contributing to the retrogression of the company”, he bemoaned.

A driver of the transport company who spoke off-camera narrated that their night journey allowances are not paid and the monies they received as drivers on parcels have been taken over by management.

The frustrated driver said “previously, monies charged on parcels belonged to drivers but now the monies go to management whiles we get nothing as drivers. They promise to use the parcel monies to provide us with welfare packages but we get nothing. We make more than five thousand a day on parcels but nothing to show. Even our night driving allowance of 20gh is not paid to us. We sometimes struggle before getting what is due us.”

“That Adu-Boahen must be sacked. He and his colleagues in Accra are corrupt and make no effort to expand this company. A vehicle can be parked for weeks just because of little maintenance. They give preferential treatment to ladies especially in charging the parcels. They are only contributing to collapse the company and not to ensure efficiency”, he alleged.

They, therefore, call for the removal of the managing director, Albert Adu-Boahen and his deputies with immediate effect and the reconstitution of the 9 member management team of the company.

I'm Adwenpa-Hene |Blogger & Broadcaster Journalist. I am the CEO and manager of this noble website. I publish on Entertainment, Sports, Politics, Lifestyle, and Technology. You can also follow Us on : YouTube Channel - My Ghana Media TV, Facebook - MyghanaMedia TV , Twitter - @MyGhanamedia2 & Instagram - My Ghana Media TV. Email Address: [email protected] Contact Us: 0200818719
@@MyGhanamedia2
Previous Prof Naana Jane, Others Storm SHE POWER Summit For Insight ….
Next Mahama Stands Tall To Lead NDC In 2024 Elections