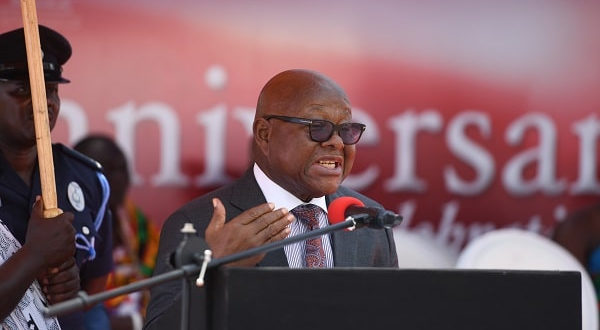 Former Speaker of Ghana’s Parliament, Professor Mike Aaron Oquaye has called for a review of the appointment of the Electoral Commission Chairperson.

According to him, the appointment of the chair person by the every sitting President in accordance with the constitution, has always created challenges particularly between the two competing political parties.

For him, the EC chair should be elected by a commission members whose decision will be independent of any interferences, 3news.com reports.

“The Commission members being quite independent, not elected by the president or anyone, will then choose a chairperson, so that the work of the commission is collegial and collectives, then they are satisfied.

“In some places, you will find the situation whereby the EC boss is for a fixed term, 6 years, it recently happened in Nigeria. So that after doing a particular work you go, so that in choosing the EC boss it is usually a retired Professor or a Professor about to retire, a judge who is just part of the system, and then you do that work for 6 years, and then you leave,” he is quoted to have said by 3news.com.

Mr. Oquaye further indicated that the proposed selection process will help encourage a peaceful political environment and also safeguard the work of the EC which is to work independently.

“In other words, there is no end to wisdom with regards to what we have got now, nomination by the President and then ultimate approval by Parliament. Of course, if the president has Majority in Parliament, then the approval is as well as his nomination. All these I believe should be examined if we should have a peaceful political terrain, that is what I have ben saying,” he noted.

The President of Ghana has appointment power under the Constitution to appoint the EC chair.

While the framers of the Constitution have imposed varying levels of constraints on the President’s appointment power for democratic, governmental, prudential, and even historical considerations, the President wields both consultative and approval powers.

The President is compelled to act on the advice of the Council of State in selecting the Chairman/Chairwoman and members of the Electoral Commission as stated in Article 70(2) of the Constitution.

“The President shall act on the advice of the Council of State; appoint the Chairman, Deputy Chairmen, and other members of the Electoral Commission,” the constitution indicates.

I'm Adwenpa-Hene |Blogger & Broadcaster Journalist. I am the CEO and manager of this noble website. I publish on Entertainment, Sports, Politics, Lifestyle, and Technology. You can also follow Us on : YouTube Channel - My Ghana Media TV, Facebook - MyghanaMedia TV , Twitter - @MyGhanamedia2 & Instagram - My Ghana Media TV. Email Address: [email protected] Contact Us: 0200818719
@@MyGhanamedia2
Previous USA Based Ghanaian Citizen Donates Clothes And Cash To 217 Widows
Next Inflation Shot Up By 3.8% To End 2022 At 54.1%; Lending Rates To Remain High