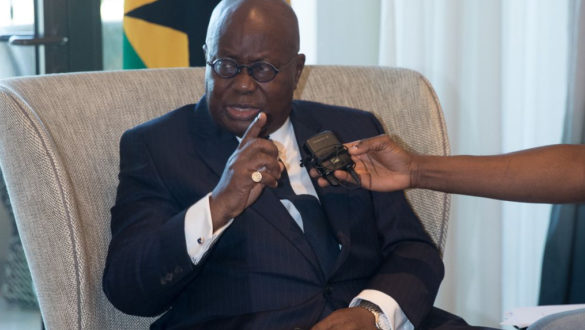 The President maintains, he has not thrown his hands in despair in fighting the canker through strengthening anti-graft institutions, transparency in governance and the protection of the public purse.

In a televised address to the nation on the eve of Constitution Day to mark 30 years of Ghana’s Fourth Republic, Nana Akufo-Addo said his government should be credited for some of the giant steps aimed at ending the menace.

“I say, without any form of equivocation, that my government has undertaken, arguably, the boldest initiatives since independence to reform and strengthen the capacity of our institutions to tackle corruption in the public sector”.

See also  [email protected]: Ours Is A Story Of Hope – Nana Addo

Corruption, according to many activists and Civil Society Organizations has been increasing over the years under the Akufo-Addo government.

They feel this administration tops the list with the most cases of corruption.

But President Akufo-Addo further emphasized that: “If we seek to prolong our democratic journey, it is imperative that we enhance transparency and accountability in our governance structures, and build strong institutions that can fight corruption and the dissipation of public funds.”

The President did not end there.

He indicated that, the establishment of the Office of the Special Prosecutor and the resourcing of same remain the single act of commitment that the Akufo-Addo government has prioritized the fight against deep-rooted corruption describing it as “an independent, non-partisan body, with the relevant professional capability and exclusive mandate to investigate and prosecute acts of corruption.”

Despite attacks on its reputation, the government has mounted a spirited defence for its corruption fight, especially with the establishment of the Office.

The office has been chastised by Ghanaians for being ineffective in its fight against corruption years after its establishment because not a single case of corruption has been concluded with those complicit facing prosecutions.