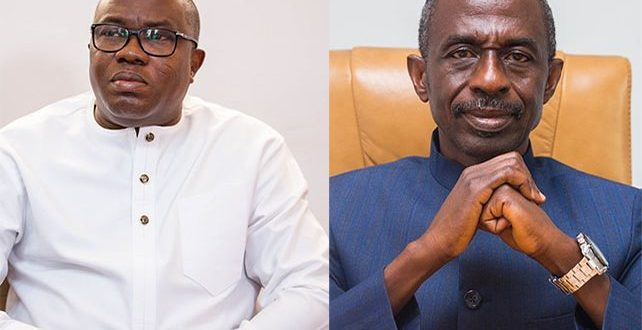 National Chairman of the opposition National Democratic Congress, Samuel Ofosu Ampofo has sent a strong warning to his General Secretary, Johnson Aseidu Nketiah who is contesting him for the topmost position to stop peddling lies against him, if he (Asiedu Nketiah) doesn’t have any message to tell the delegates.

He tasked Mr. Asiedu Nketiah and his campaign team to throw in the towel and withdraw from the race if they have no message for the delegates.

Ofosu Ampofo said this when addressing journalists in Koforidua, the Eastern Regional capital over the weekend when he was reacting to allegations leveled against him from the Camp of Aseidu Nketiah.

Reacting to some of the allegations, he said “…and if they have nothing to say they should throw in the towel and withdraw from the race because I want to assure you that I will win this election and I will win it hands down, and I will lead the NDC to power “.

He also refuted claims that dismissed former members of the party such as Koku Anyidoho, and Allotey Jacobs are members of his campaign team, adding that the rumor being peddled by his opponents is a deliberate attempt to court disaffection for him but that has failed.

“For the records, I am National Chairman, I presided over the meeting where we decided to dismiss Koku Anyidoho and Allotey Jacobs. I will be the last person to undermine my party. For those spreading rumors that Koku Anyidoho and Allotey Jacobs are members of my Campaign team, I want to categorically state that this is mere propaganda and false. It is a figment of their imagination. Under no circumstance will I bring persons dismissed by the party, who are not even delegates to become campaign team members”.

He said, he has enough men and women with integrity supporting his campaign

“I don’t lack people who will campaign for me who are bonafide members of the NDC. So those contesting me should come and tell us what they will do when they become national chairman and others. They should not hide behind people to say that Koku Anyidoho, Yaw Boateng Gyan, Dela Coffie, and Allotey Jacobs are regular panel members of Ahotor FM which is a radio station that belongs to me. None of them has been a panelist on my radio station before. So I want to use this medium to dismiss that propaganda being festered.”

Samuel Ofosu Ampofo also debunked festering propaganda that he is “anti-John Mahama” adding that no amount of lies and propaganda can mar the exceptional relationship and loyalty to former President John Dramani.

Mr.Ofosu Ampofo said his loyalty to Mr.Mahama is unquestionably promising full support for him.

“I have been loyal to President Mahama and continue to be loyal to him. And I want to state that if our delegates endorse him or vote for him which I know is a possibility and likely scenario, I will give him my 200% support. I will work for him 24 hours to ensure that he wins the next elections and form the next government to bring the policies to rescue this country into reality”

Mr.Ofosu Ampofo says he is confident delegates of the party will re-elect him having led the party to improve its performance from 4.8 million votes to about 6.3million votes in the 2020 presidential election, increased parliamentary seats from 106 to 137 and annexed the speaker of Parliament position for the party.

He added that under his leadership, retreats have been organized for the constituency and regional executives, and party reorganization conducted to ensure that branches and wards of the party are activated toward the 2024 polls.