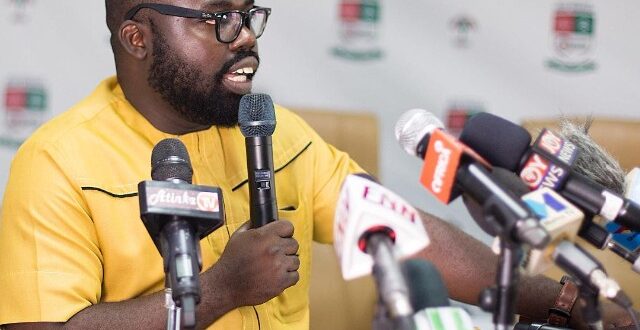 NDC Has Ghana At Heart – Otokunor

Deputy General Secretary of the opposition National Democratic Congress (NDC), Peter Boamah Otokunor has touted the achievement of his party, saying the Umbrella has Ghana at hearts  more than any other political party.

He said the NDC is the only party which has the blueprint and commitment to develop the country with the needed infrastructure to make life comfortable.

Mr. Otokunor made this remark when he paid a courtesy call on the Paramount Chief of Ekumfi Traditional Area, Omanhen Nana Odeefuo Akyen Vlll on Saturday after attending a funeral at Ekumfi Ekumpoano in the Central Region.

Counselling Mr Otokunor on happenings in Ghana’s political landscape, the Paramount Chief said “Ghanaian politicians must focus on issues that bothers on improving the living standard of the people.”

He also noted that party communicators in particular who appear on media platforms to propagate their party’s policies must have knowledge on the subject matter to be discusses in order to make meaningful contribution to the national dialogue.

Mr. Otokunor was accompanied to the chief’s palace by the Central Regional Vice Chairman of the NDC,Theophilus Adu Mensah; the Deputy Secretary, Kofi Matthew; Regional Communications Officer and Deputy, Kwesi Dawood and Kwesi Ghartey as well as some other NDC executives from the Ekumfi Constituency.