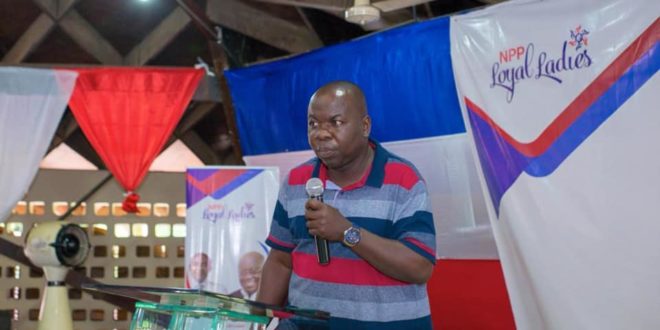 NDC Is Dormant Party, Not Ready For Power – Director of Political Affairs At Presidency

Director of Political Affairs at the Office of the Chief of Staff, Frank Asiedu Bekoe, popularly known as ‘Protozoa’ has taken a swipe at the National Democratic Congress (NDC) as he strongly believes the latter has branded itself as a propaganda party.

According to him, the opposition NDC is not a serious political party that can lead the country to achieve its goals, and therefore not ready or prepared to lead the country as he advised Ghanaians not to vote them into power.

He made this assertion in Suhum, in the Eastern Region when urging the various aspirants vying for the Constituency, Regional, and National Executives positions of the ruling New Patriotic Party (NPP) to campaign on what will project the party to win the 2024 general elections.

He explained that “We started reorganizing the NPP party after the court ruling on the NDC petition. Court realized their petition had no merit. The constitution also binds us to organize certain things as a party to prove our worth”

“Ideally, the opposition party should have done it before the ruling party but the narrative has changed which shows the NDC is a dormant political party, all that they do now is propaganda. As it stands now, the NDC is run on Television and Radio stations”

“The NDC even in opposition is not ready nor prepared to even organize its own home, how much more Ghana? he quizzed.

“Even in opposition, the NDC is lazy because they have failed to even do their conference and other key things. I want Ghanaians to know that the alternative is a lazy one, it is scary but in a nutshell, it is a party that is not prepared to govern this country”

“I believe the NDC is on a time bomb and I think that it is going to soon explode. NPP is in government and it is obvious the pressure will be on the ruling party than the opposition but to be able to organize ourselves to this level, I think the NDC has nothing good to offer”.

He, however, urged Ghanaians to believe and rally behind the Akufo-Addo/Bawumia-led government to succeed.

I'm Adwenpa-Hene |Blogger & Broadcaster Journalist. I am the CEO and manager of this noble website. I publish on Entertainment, Sports, Politics, Lifestyle, and Technology. You can also follow Us on : YouTube Channel - My Ghana Media TV, Facebook - MyghanaMedia TV , Twitter - @MyGhanamedia2 & Instagram - My Ghana Media TV. Email Address: [email protected] Contact Us: 0200818719
@@MyGhanamedia2
Previous Asamoah Gyan Appointed As Ghana’s Ambassador For The 2022 World Cup
Next #WorldPressFreedomDay: ‘Without Freedom Of The Press, There Are No Real Democratic Societies’ – UN Secretary-General