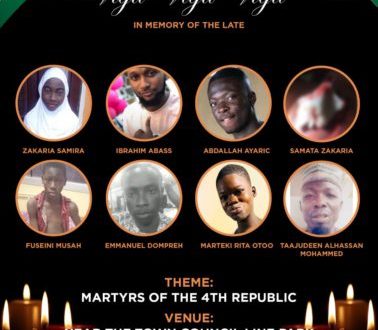 NDC To Hold Vigil For Victims Of 2020 Electoral Violence

The National Democratic Congress (NDC) will on Thursday hold a vigil in memory of persons who lost their lives as a result of the violence that ensued during the 2020 general elections.

The event will be held at the Town Council line, between Zongo Junction and Radio Gold in the Ablekuma Central Constituency.

According to the party, the vigil dubbed, “Martyrs of the 4th Republic” will commence at 6pm and all should “be part of this event as we all pray for the souls of the departed.”

Activities lined up include Quran recitations, Christian and traditional prayers for the dead.

Thirty-year-old Ibrahim Abass died at the Korle-Bu Teaching Hospital where he was receiving treatment for a gunshot wound. He was a victim of the shooting incident that occurred in the Ablekuma Central Constituency during the j2020 general elections.

He and four other persons, including a Police officer, were shot at the collation centre at the Odorkor Police Church.

In the Ododiodoo Constituency, a 15-year-old girl lost her life as a result of a scuffle. Again, two deaths were recorded at the Techiman South collation centre. Eight persons sustained injuries in the locality according to Director-General of the CID COP Isaac Ken Yeboah.

Meanwhile, the National Chairman of the party, Samuel Ofosu-Ampofo, General Secretary, Johnson Asiedu Nketia and the leadership of Parliament are among those expected to participate in the vigil.

Interior Minister, Ambrose Dery also pledged to deal with persons found culpable in the electoral violence that occurred during the December polls.

Following the polls, the Criminal Investigations Department said it is still conducting investigations to unravel persons behind the shooting which led to death of two individuals at the Techiman South Collation Centre.

The accused, Collins Kwaku alias ‘Kola’ was arraigned on 6 counts including causing harm, possession of firearms without lawful authority and using offensive weapons without legal authority.

I'm Adwenpa-Hene |Blogger & Broadcaster Journalist. I am the CEO and manager of this noble website. I publish on Entertainment, Sports, Politics, Lifestyle, and Technology. You can also follow Us on : YouTube Channel - My Ghana Media TV, Facebook - MyghanaMedia TV , Twitter - @MyGhanamedia2 & Instagram - My Ghana Media TV. Email Address: [email protected] Contact Us: 0200818719
@@MyGhanamedia2
Previous Alban Bagbin: Who Am I To Say Joe Wise Indulged In An Act Of Misconduct Tantamount To Insubordination?
Next We Are Waiting for OSP – Atta Akyea’s Office Reacts To Petition To Probe Him