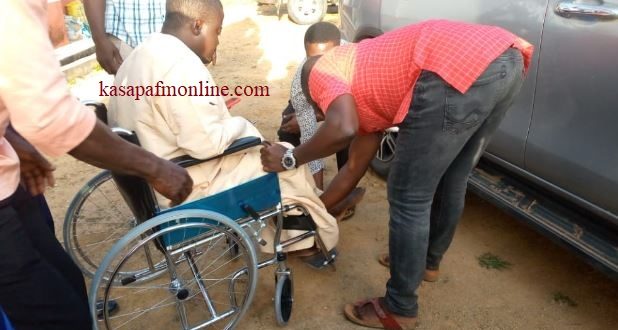 An aspiring Constituency Chairman for the National Democratic Congress in the Abura Asebu Kwamankese Constituency in the Central Region has become paralyzed a day before appearing before a vetting Committee in the Constituency.

Information gathered revealed that the aspirant, Vicent Koomsom, 24 hours prior to the vetting exercise suddenly lost the strength in his legs as soon as he got down from his vehicle.

The incident has thrown family and friends into a state of shock as they believe there’s been some spiritual orchestration because he’d been very strong and active all this while.

He’s said to have driven his own vehicle to where he became paralyzed.

See also  Open Letter To Akufo-Addo: Ghanaians Have Had Enough Of The Suffering; Resign Now!

Vicent Koomsom was eventually disqualified from the Chairmanship race for unknown reasons. He later filed an appeal to the Regional Vetting Committee but his disqualification was still upheld.

According to his supporters, the man has helped the party in the Abura Asebu Kwamankese Constituency and it’s time he should be allowed to lead the party to wrestle power in the 2024 general election.

They warned that the NDC will lose in the constituency if Vicent Koomsom is denied the opportunity to contest the position.

He appeared at the NDC Central Regional Office in a wheelchair to defend his disqualification but the earlier decision was not overturned and consequently filed another petition yet to be studied.

Vicent Koomsom’s supporters have accused former Deputy Minister of Communications, Felix Ofosu Kwakye who was the 2020 Parliamentary candidate for the area of having a hand in his disqualification.

However, Felix Ofosu Kwakye has vehemently denied that accusation saying the vetting Committee used the party’s rules and regulations in the discharge of their duty and was fair to all aspirants that appeared before them.