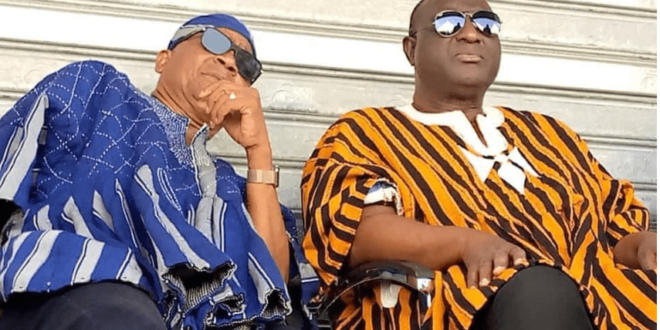 The euphoria around Ghana’s Trade and Industry Minister, Alan Kyerematen recorded another exciting moment over the weekend when he visited the Northern Region for the final funeral rites of Hajia Fadila Tahidu, a known member of the ‘Alan for President Volunteers’ movement.

Mr Kyeremateng who stormed Tamale on Sunday, November 20, 2022 was stunned by the massive turn out that welcomed him on arrival and at the funeral ground.

Upon arrival at the funeral ground, AlanCash as he is popularly known was mobbed by the masses with chants for his political endorsement.

Among the chants from the teaming fan base were “No Alan No Vote”, “AlanCash Aduruso” and “AlanCash the People’s Choice” at the home grounds of his most likely direct competitor, Dr. Mahamudu Bawumia.

Alan Kyerematen and his delegation were received by distinguished senior members of the NPP in the Northern Region led by Alhaji Hindu, former Northern regional Organizer of the New Patriotic Party and Northern Campaign Coordinator for the Alan for President volunteers movement and Alhaji Raman Mumin COP, Business Executive and NPP Youth Activist

The bereaved Tahidu family is a known prominent family in the New Patriotic Party (NPP) fraternity in the Northern region of Ghana.

There is a very cordial and longstanding relationship between the Tahidu family and the Hon Minister for Trade and Industry, Alan Kyerematen.

The late Hajia Fadila Tahidu was called to her maker on November 11, 2022, after a short illness.

Mr Kyerematen took to his Facebook page to commensurate with the bereaved family:

“My wife, Patricia and I have received with devastation and utter shock the untimely death of a hard-working, promising and loyal patriot, Fadila Tahidu. Fadila, who was like a daughter to me, passed on to glory on Friday at the Ridge Hospital in Accra, where earlier in the day l had visited to commiserate with the family. Fadila’s demise is indeed heartbreaking to my family and the New Patriotic Party. She was a loving “daughter” whose life has been cut short in her prime. In this time of sadness, I pray that Allah grants us the patience to bear this difficult loss. Our heartiest sympathy to her father, my very good friend, Alhaji Tahiru and the entire family. May Allah give Fadila an easy and pleasant journey and shower blessings on her grave.”

It is highly expected that the Trade and Industry Ministry will contest the upcoming Presidential Primaries of the NPP to lead the party in its quest to retain power come 2024.

This will be the 4th bid from Alan Kyerematen in the quest to lead New Patriotic Party to the Presidential polls.

Some analaysts have tipped to realize his dreams ahead of next year’s Primaries.

I'm Adwenpa-Hene |Blogger & Broadcaster Journalist. I am the CEO and manager of this noble website. I publish on Entertainment, Sports, Politics, Lifestyle, and Technology. You can also follow Us on : YouTube Channel - My Ghana Media TV, Facebook - MyghanaMedia TV , Twitter - @MyGhanamedia2 & Instagram - My Ghana Media TV. Email Address: [email protected] Contact Us: 0200818719
@@MyGhanamedia2
Previous Preterm Birth Is Not Spiritual; It Is A Medical Condition – Medical Officer
Next Election Petition Against NDC’s Jomoro MP Struck Out