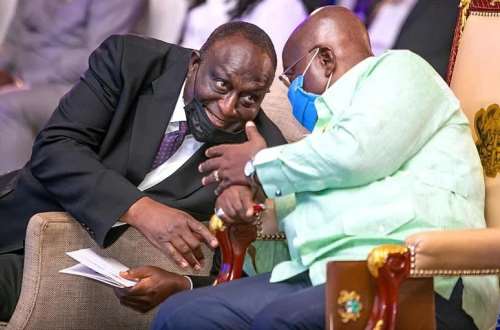 The President, Nana Addo Dankwa Akufo-Addo says he would “have to act” if ministers who are interested in becoming NPP presidential candidates allow their personal interests to override that of the state.

Some appointees in the current government have been mentioned to be getting ready to succeed him.

Names such as Dr Mahamudu Bawumia, the vice-president, Alan Kyeremanten, Trade Minister and the Minister of Food and Agriculture, Dr Owusu Afriyie Akoto have come up in the NPP presidential candidate race.

There is a school of thought that the ambitions of these persons may be affecting their national duties but the president said he has no evidence of such.

Speaking on Accra-based Peace Fm on Thursday (21 October), President Akufo-Addo said, “I have no evidence that peoples’ ambitions are interfering with the work that there are doing. I continue to see in the cabinet, in the government, people who are working strongly for the country… because if that was to happen I will have to act.”

He added “… Assuming that because of someone’s ambition, he puts his portfolio aside; if it happens that way, obviously the president cannot be unconcerned. I’ve been in this position before; I was a minister in President Kufour’s government. [I was] Foreign Minister at the time that the bell was sounded and I had to comport myself accordingly.”

The president has therefore charged the leadership of the New Patriotic Party (NPP) to ensure that processes leading to the selection of a flagbearer for the 2024 election are free, fair and transparent.

“There are two issues that matter to me; that we [NPP] should have a transparent, credible acceptable process for choosing our next flagbearer. That as I came out of such a process, it should be my responsibility that the process of choosing the next leader of the NPP is equally free of doubt, machination or manipulating …

“And I’m hoping that a level playing field that allows us to elect our next presidential candidate will also bring us a candidate who can unite our party. Because competition will always bring some divisions in the party but we are the ruling party so there is a responsibility on us to conduct ourselves well.”

I'm Adwenpa-Hene |Blogger & Broadcaster Journalist. I am the CEO and manager of this noble website. I publish on Entertainment, Sports, Politics, Lifestyle, and Technology. You can also follow Us on : YouTube Channel - My Ghana Media TV, Facebook - MyghanaMedia TV , Twitter - @MyGhanamedia2 & Instagram - My Ghana Media TV. Email Address: [email protected] Contact Us: 0200818719
@@MyGhanamedia2
Previous We Have Performed Well In Road Sector But We Need To Do More – Akufo-Addo
Next Ghanaian rapper,Medikal Arrested For Brandishing Gun In A Video On Social Media