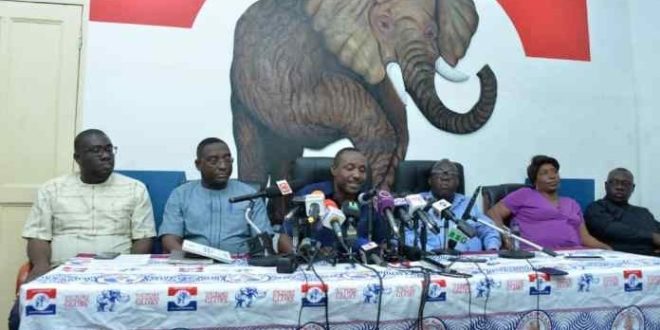 The National Executive Committee (NEC) of the New Patriotic Party (NPP) has announced a timetable for the election of its local and national executives ahead of the 2024 polls.

The New Patriotic Party (NPP), has set July 14 to July 16 to elect new National Officers for the party.

The party has also set April 22 to 24 for the constituency election and 20th to 22nd of May for regional elections.

Addressing a press conference in Accra, the General Secretary of the party, John Boadu, said the National Council of the party met on Thursday to set the dates for the elections.

“The venue for the national annual delegates conference as decided by the national council is in Accra,” he said.

See also  Asantehene To UTAG: ‘Times Have Changed; Be Measured In Your Expectations'

“All other positions will cost GHS 8,000 apart from the special wings,” Mr. Boadu added.

The elections will be supervised by the party’s National Elections Committee.

The National Council of the NPP has set down timelines for the conduct of its internal elections to elect officers right from the polling stations to the National.

So we have the following officers taken charge of the album and the elections at the polling station:
👉Chairman
👉 Secretary
👉 Research and Election
👉MP”s Rep
👉Regional Rep