Breaking News
Home / GENERAL NEWS / NPP To Ghanaians: Support The 2022 Budget, It Is Good For The Economy 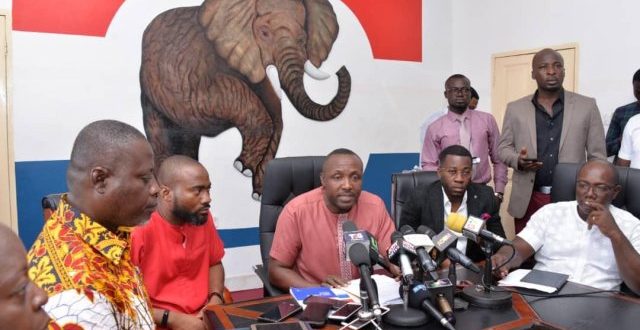 NPP To Ghanaians: Support The 2022 Budget, It Is Good For The Economy

The New Patriotic Party (NPP) has asked Ghanaians to support the 2022 budget statement presented to Parliament by the Finance Minister Ken Ofori Atta.

General Secretary of the NPP, John Boadu says the budget contains policies that are targeted at strengthening the local economy.

He explained that this particular budget is designed to move the country from external borrowing to generating revenue locally to embark on development projects.

Addressing a gathering on the budget on Monday November 29, he said “As long as  we continue to export raw materials for little money and use those moneys to  import expensive finished goods at a lower duty level, we shall  continue to struggle with raising revenue to fund development and social services. So, politically, it sounds good for the NDC to say, no way to the restoration of benchmark values but ultimately, such a posture is against the industrialization agenda necessary to create  jobs. So it is important to ask the NDC what their industrial policy is. Does the NDC have the plan to change the structure of the import-expert economy? If so, what is the plan?

“The bottom line is that, the NPP won a mandate in the 2020 general elections to continue to govern this country according to its manifesto and the record of  cumulative achievements in this fourth republic .

“The party will be resolute in pursuing policies that inure to the long term benefit of Ghanaians as often stated by His Excellency Nana Addo Dankwa Akufo-Addo. We are here to make decisions  to further good governance. We are not in government to avoid hard decisions for the sake of political power. That way, power loses credibility because it is disabled from serving the people’s true interest.

“In conclusion, the NPP will continue to offer well thought through policies to the good people of Ghana.

“These policies will generate the much needed jobs and incomes for our youth.

“The New Patriotic Party remains sensitive to the needs of Ghanaian people in the capacity of Ghanaians to take charge of their own future. It is on this basis that we call on all Ghanaians to support this government budget for growth and expansion of our economy.”

His comments come after Parliament rejected the 2022 budget statement presented on behalf of President Akufo-Addo by his Finance Minister, Ken Ofori-Atta, on Wednesday, November 17.

The Majority members had staged a walkout during proceedings on Friday, November 26 but that did not stop the Speaker, Alban Bagbin, from ruling on the motion.

He had given a five-minute break for the Majority members to resume their seats.

But after the time elapsed, Speaker Bagbin ruled that the budget has been rejected after the members present overwhelmingly shouted ‘No’.

Following this development, the Majority Leader in Parliament, Osei Kyei-Mensah-Bonsu, is accusing the Speaker, Alban Sumana Kingsford Bagbin, of partisanship in the manner which he handled the motion by the Finance Minister on the 2022 budget statement and economic policy of government.

The motion, as presided over by the Speaker on Friday, November 26 in the absence of the Majority, was lost.

But in spirited challenge to events that unfolded in the House on Friday, the Majority says the Speaker’s actions were unconstitutional and the legal references he fell on to go ahead with the votes were incongruous.

“We want to put it on record that the Speaker was totally wrong in what business he purportedly undertook in the House in our absence,” the Suame Member of Parliament said.

“Now, what exercise he led for our colleagues on the other side to take a decision on related to a request from the Minister to be allowed space to engage both sides of the House in order to have some consensus and the position that the two sides of the House had adopted.”

The longest-serving MP says he struggles to recollect in the current Republic when a prayer by a minister to revise a position on a motion has been denied by a Speaker.

“When has this happened?” he wondered.

“But be that it may [the Speaker] went ahead, did what he did in our absence because we were not in the chamber. Then went ahead to state that the motion on the budget as moved by the Minister of Finance on Wednesday, November 17 is lost.

“That whole procedure in unconstitutional. As far as we are concerned, it is null and void and it has no binding effect on anybody.”

It is unclear what next action will be taken by the Majority as the Speaker is set to travel to the United Arab Emirates (UAE) for a medical review.

The Majority Leader insists Mr Bagbin, who had served as MP since the start of the Fourth Republic until his election as Speaker in 2021, ought to have known the rules better in referencing Article 104 instead of Article 102.

“Assuming without admitting that he had 137 members in the chamber, they were still less than one half of the 275 and by necessary implication, that exercise that he engaged in or supervised is a complete nullity and I believe that whoever presided should bow down his head in shame.”