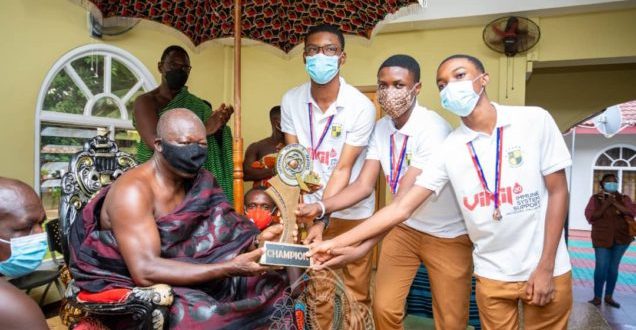 The visit by the Amanfuo Boys was to officially inform the father of the Ashanti land of their glorious victory in their quest for a fifth trophy at the NSMQ competition.

The five-time winners paid their respect to the Asantehene and humbly presented the NSMQ trophy to the king.

The team that led Prempeh College to victory and the school authorities also paid their respect to Otumfuo Osei Tutu II.

The Amanfoo Boys on November 26, came face to face with six-time champions, Presec-Legon and Keta SHTS at the grand finale of this year’s NSMQ contest.

The race, right from the beginning of the first round saw a keen and stiff competition by all the three schools as they locked horns and went neck to neck for the first position.

Although Prempeh College won, it was a super tough five rounds for all the three schools.

The True or False round had the ‘Dzolalians’ substituting Francisca Lamini with James Lutterodt. Presec equally made a substitution for Joel Aboagye to take over from Henry Otumfuo.

Although they did not make any substitution, Prempeh had almost all their answers right in the fourth round.

The highly-anticipated race was finally decided in the last round where the boys from the ‘University of Sofoline’ proved their mettle to defeat the Presecans.

The host and win agenda finally became a reality when the ‘Seniors’ floored the Odadie boys with an outstanding brilliance.

At the end of the contest, Prempeh College amassed 53 points while Presec-Legon accumulated 49 points with Ketasco managing 30 points.