Breaking News
Home / GENERAL NEWS / Otumfuo To Doctor Who Swept 15/21 Awards: I Bless You To Go And Specialize But Never Forget Ghana 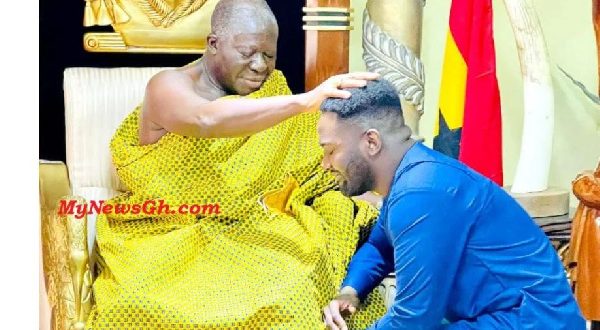 Otumfuo To Doctor Who Swept 15/21 Awards: I Bless You To Go And Specialize But Never Forget Ghana

Asantehene, Otumfuo Osei Tutu II has urged Dr Edward Akosah Danso who recently graduated from the University of Cape Coast School of Medical Science not to turn his back on Ghana by seeking greener pastures elsewhere.

He appealed to him to ensure that he serves the country with all his might to help improve healthcare delivery while appealing to him to specialize.

The Alumnus of Prempeh College and son of the former Director-General of Police CID, Welfare and Intelligence and Professional Standards Bureau, COP Maame Yaa Tiwaa Addo-Danquah became the poster boy of the 54th graduation ceremony of the university sweeping 15 of 21 awards to set a new record at the School of Medicine.

During a time courtesy call on the King at Manhyia Palace, he advised him not to be swollen-headed by the awards but urged him to remain and be of service to Ghana and the world at large.

See also  Gov't Gives Over 400 Acres Of Military, Other State Land To Asantehene

“You should consider specializing as soon as it is practicable. Wherever you get to in the medical profession, you should come home and practice and serve this country…. Never forget his country and you should also not let the award make you swollen-headed but be of service to Ghana and the world at large,” he advised

25-year-old Edward Akosah Danso thanked Otumfuo for the words of wisdom and assured him he will make the country proud.

“I will not forget all the pieces of advice you have given me Nana and I promised to live by them,” he assured.

See also  What Have You Done With The Minerals Royalties? – Adansihene Asks Government

Otumfuo Osei Tutu II also praised COP Maame Yaa Tiwaa Addo-Danquah for bringing him up and supporting him through his education.

The award-winning Doctor in an earlier interview with MyNewsGh.com on his future is quoted to have said, “I want to eventually end up in academia as a Professor of Surgery. I am considering specializing in transplant surgery, a subspecialty of general surgery and establishing a transplant center to serve the country”