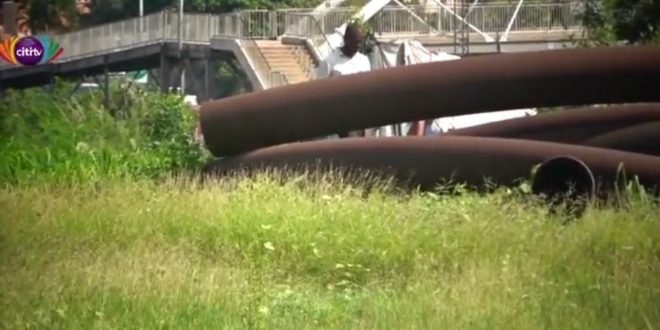 The Tetteh Quashie interchange, named after a pre-Ghanaian agriculturist, has become a haven for unscrupulous people who find comfort in defecating in the bushy area.

The location of the huge roundabout could be described as the heart of Accra due to its prime location and accessibility to other routes in the capital.

Aside from using the place for defecating, some petty traders who ply their trade along the major roads have converted the place into a refuse dump.

When Citi News visited the bushy interchange at 2:42 pm on Tuesday, June 7, 2022, it was observed that the weeds had grown beyond the knee level while two mowing machines were seen idle under a tree.

At about 3:10pm, a man, who later gave his name as Ernest Yeboah, ignored the presence of the camera and went to defecate at a place where some rusted metallic pipes had been left at the mercy of the weather.

When he was accosted and asked about his reason for defecating in the bush, he said he “had stomach upset” which compelled him to use the place.

He was asked what he thinks should be done to protect the space from defecation, and he suggested that “a fence wall should be erected around the land and the bush cleared”.

He said, at best, the place should be converted to a park/garden to add to the beauty of Accra.

The medians of some principal streets in Accra have been left unattended.

The situation has contributed to flooding on the roads anytime it rains.

On the Dzorwulu highway, the median, which separates the dual carriageway, is overgrown with weeds.

Some of the creeping weeds have started climbing the wire mesh used to prevent pedestrians from crossing at unauthorized places. This road connects vehicles from the Accra motorway to Cape Coast and other parts of the country.

The road from the Airport junction to Shiashie was not an exception. The bushy weeds have taken over the beauty of some trees planted in the median as part of the green Ghana project.

Some billboards were also covered in weeds along the Okponglo route leading to the University of Ghana.

The median of the Mahama road from the Major Maxwell Mahama roundabout to the military cemetery connecting to Teshie was equally bushy.

All these major medians fall under various municipal assemblies, including the La Nkwantanang Municipality, which has Madina as one of its busiest communities.

I'm Adwenpa-Hene |Blogger & Broadcaster Journalist. I am the CEO and manager of this noble website. I publish on Entertainment, Sports, Politics, Lifestyle, and Technology. You can also follow Us on : YouTube Channel - My Ghana Media TV, Facebook - MyghanaMedia TV , Twitter - @MyGhanamedia2 & Instagram - My Ghana Media TV. Email Address: [email protected] Contact Us: 0200818719
@@MyGhanamedia2
Previous Let’s Build The Cathedral Together For Ghana And For The Glory Of God.” – Anyaa Sowutuom MP
Next Upper East Region: Man Shot, Burnt To Death In Pusiga