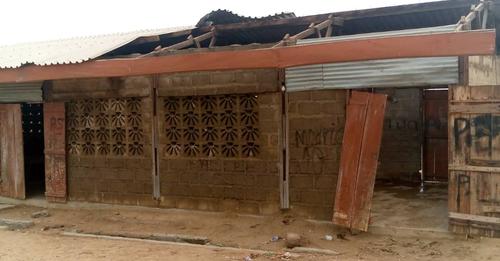 At least 11 pupils of the Paga E/A primary school in the Kassena-Nankana West District in the Upper East Region have been left injured after the walls of two classrooms collapsed on them.

A heavy rainstorm on Monday (21 March) swept through the town and ripped off roofs of buildings and schools in the town.

The school officials said the wounded pupils have been rushed to the Paga District Hospital for medical attention, adding no lives were lost.

The headmaster of the school, Addiyire Peter Ajegiwe, told Asaase News Upper East regional correspondent Senyalah Castro that, “failure on the part of local authorities to renovate the dilapidated school building despite knowing its condition is to blame for the disaster.”

He said the school’s management had written severally to the district assembly since 2017 informing it of the worsening condition of the school building, but there was no positive response.

Addiyire said the latest incident is a warning and called on public officials to sit up.

“Activities in the school will be affected if authorities are not quick in their response to address the challenge brought by the disaster,” he added.

He was particularly worried how the school will operate in the rainy seasons.

Listen to him in the attached audio below:

I'm Adwenpa-Hene |Blogger & Broadcaster Journalist. I am the CEO and manager of this noble website. I publish on Entertainment, Sports, Politics, Lifestyle, and Technology. You can also follow Us on : YouTube Channel - My Ghana Media TV, Facebook - MyghanaMedia TV , Twitter - @MyGhanamedia2 & Instagram - My Ghana Media TV. Email Address: [email protected] Contact Us: 0200818719
@@MyGhanamedia2
Previous Policy Rate Increased Substantially To 17%; Cost Of Loans To Go Up – Bank of Ghana
Next Government To Cut Salaries Of Appointees By Between 20% And 30%