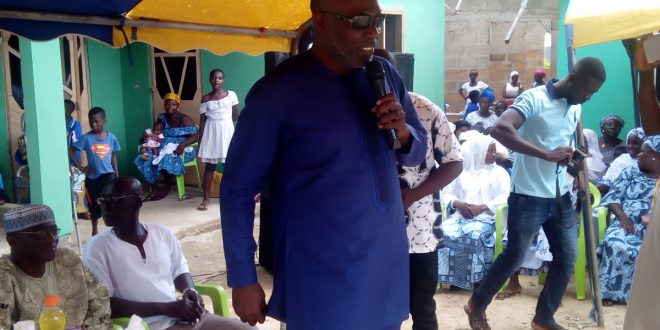 The 2021 farmer’s day celebration has been recently launched on the Friday 3rd of December with most farmers getting recognized and awarded for their efforts in the Agricultural sector.

This year saw many farmers from various districts in the 16 regions showcasing their beautiful produce as they were commended for being able to produce even in the Covid-19 period.

The Eastern Region known for recording massive crop yield over the years was not left out as many farmers from it’s various districts displayed crops and livestocks such as Yam, Cassava, Plantain, Palm oil, Chicken,rabbits, grasscutters and many others from their harvest in the open at the different event centers.

A notable event was that of the Asene-Manso-Akroso District which was chaired and honoured by dignified personalities being the member of parliament of the district, Hon. George Kwame Aboagye “Oluwa” , Nana Kakari Apau II and other instrumental persons at the Asene community center.

See also  Boakye Agyarko To Akufo-Addo: Admit The Economy Is Not In Good Shape

Speaking at the Event, Hon. George Kwame Aboagye “Oluwa” said that the Planting for Food and Jobs initiative by the government has sustained the nation’s food security and has seen 2000 farmers in the district as its beneficiaries.

According to him, the Planting for Food and Jobs programme introduced by President Akufo-Addo remains the most effective way to ensure food security in the country.

He continued by urging the youth to go massively into agriculture so that unemployment situation in the country will reduce.

Concluding on his speech Hon. “Oluwa” said Youstart initiative is another great program on the new budget by government to support the youth should they start their own business especially in the Agricultural sector.

The event saw Nana Baafo Otoo, a traditional chief of Akyem Asene crowned the district’s overall best Farmer whilst, Mr. Mohammed Sani Abdullai came behind him as 1st runner up with Mr. Baafo Charles coming third as the 2nd runner up.

Sharing with Ahenkan FM’s reporter, Kwabena Akim, Nana Baafo Otoo disclosed that the Agricultural business is very profitable recommending it for the aged and youth alike and also called government to put more effort into the sector to boost the nation’s economy.

I'm Adwenpa-Hene |Blogger & Broadcaster Journalist. I am the CEO and manager of this noble website. I publish on Entertainment, Sports, Politics, Lifestyle, and Technology. You can also follow Us on : YouTube Channel - My Ghana Media TV, Facebook - MyghanaMedia TV , Twitter - @MyGhanamedia2 & Instagram - My Ghana Media TV. Email Address: [email protected] Contact Us: 0200818719
@@MyGhanamedia2
Previous Prime Suspect In Konongo Odumase SHS ‘Killing’ Case Remanded, 4 Others Discharged
Next A/R: “500,000 People Targeted To Be Vaccinated At The End Of December” – Dr. Emmanuel Tenkorang