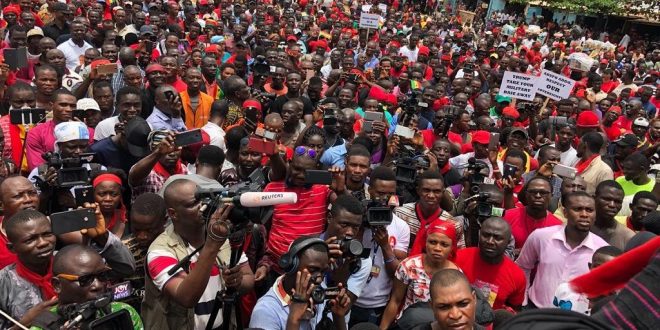 A conflict resolution, peacebuilding, and development professional, Emmanuel Bombande, has noted that there will be more protests in Ghana to ensure that duty bearers work in the interest of the general public.

To that end, he said there needs to be changes in how the Military and other security officers control crowd in order to avoid deaths.

His comments come after the General Officer Commander of Central Command, Brigadier General Joseph Aphour said that there would have been more casualties in the Ejura disturbances if the Military had used excessive force.

He told the 3-member committee on the Ejura disturbances that the military applied minimal force in controlling the crowd. The committee has ended its work on Friday July 16.

He said “It was becoming too bad for us to see civilians firing from the crowd. I think the Commander at that stage then had to use minimum force by trying to fire to maim those people who were involved. So you realized that we fired and then we didn’t have instant deaths within the crowd.

“They were evacuated to the hospital and two died. What we did that we strongly believe that there would have been more deaths if we actually wanted to proper force of firing indiscriminately more would have died.

“We tried to maim the people, we sued the minimum force not to create more problems.

“With that minimum force the effect was there, the crowd was dispersed and we were able to control the situation.”

Mr Bombande who is a senior UN advisor and also a former Deputy Minister of Foreign Affairs under the Mahama administration said on the Key Points on TV3 Saturday July 17 that “My First observation is that when we talk about the use of force, the use of force should never be to the extent that it can lead to injuries and it can lead to deaths even if unfortunately, it results as we saw.

“So there needs to be another approach which basically suggests that we cannot have excuses about the lack of proper equipment because when those become excuses. You cannot have people losing their lives and then we hear excuses such as there was inadequate equipment.

“That for me is broad generality  to suggest  protest will continue to happen…from the middle class in wealth and then you have overwhelming  majority that continue to grow poor. The type of anger  for various reasons and not particularly in any  political dispensation  will continue to happen for as long as the broad environment permits it  so what we need to do is  to improve on  the practice and ensure that there is  good practice in crowd control.”