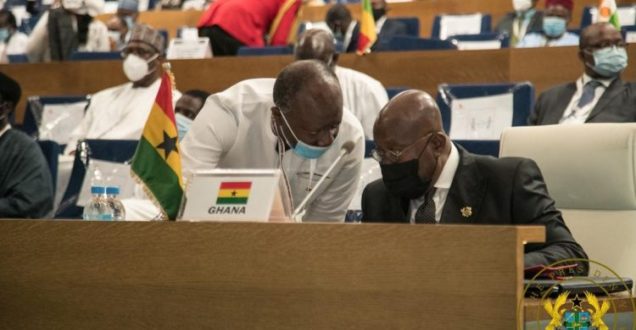 The President, Nana Addo Dankwa Akufo-Addo has asked the New Patriotic Party Members of Parliament (MPs) demanding the removal of Ken Ofori-Atta as Finance Minister to hold on till Ghana concludes negotiations with the International Monetary Fund (IMF).

The President says, terminating the appointment of Mr. Ofori-Atta will disrupt the programme.

At a meeting with the aggrieved MPs at the Jubilee House, Nana Akufo-Addo appealed for calm.

Citi News gathered that the MPs were not happy with the appeal and were still insisting on the Finance Minister’s exit.

Nana Akufo-Addo has asked Ken Ofori-Atta to be given three more weeks to conclude the IMF negotiations.

Some NPP MPs say several efforts to have government address the plights of their constituents with regard to the ailing economy had proved futile.

See also  Ofori-Atta To GIA: We Can't Exempt You From Debt Exchange Programme

They thus held a press conference on Tuesday, October 2022, to voice their disquiet and demanded the head of Ken Ofori-Atta and the Minister of State at the Ministry of Finance, Charles Adu Boahen.

Andy Kwame Appiah-Kubi, the Member of Parliament for the Asante-Akim North Constituency and spokesperson for the disgruntled Majority MPs group, told the media on Tuesday that sacking Ofori-Atta and Adu Boahen will help restore confidence in Ghana’s economy.

“The recent development within the economy is of major concern to our caucus and our constituents. We have made our grave concern known to our president through the parliamentary leadership and the leadership of the party without any positive response.”

“We are by this medium communicating our strong desire that the president changes the Minister of Finance and the Minister of State at the Finance Ministry without further delay in order to restore hope to the financial sector and reverse the downward trend in the growth of the economy,” he added.

Several Ghanaians had mounted pressure on President Nana Addo Dankwa Akufo-Addo to remove Mr. Ofori-Atta from office in light of the country’s current economic predicament, which has compelled government to seek support from the International Monetary Fund (IMF).

The Minority in Parliament has also filed a motion for a vote of censure against Ofori-Atta.