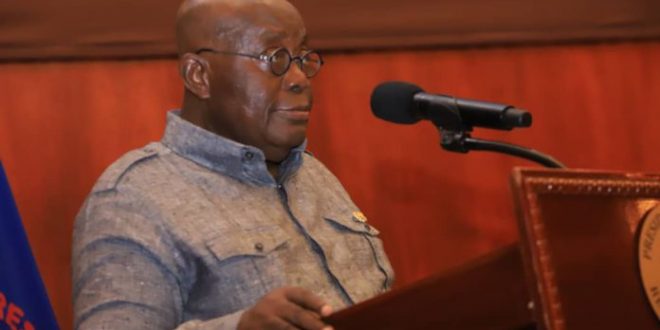 President Akufo-Addo Speaks On Corruption Allegations Levelled Against His Appointees

President Nana Akufo-Addo has intimated that his administration has undertaken “arguably” the boldest steps in dealing with corruption since Ghana attained independence nearly 65 years ago.

According to him, all allegations of corruption leveled against his appointees so far, have been probed.

“My job is to act on allegations of corruption by referring the issue to the proper investigative agencies for the relevant inquiry and necessary actions including if required, the suspension of the affected official pending the conclusion of the investigation. That is exactly what has been done since I assumed the mantle of national leadership,” he said.

He, however, noted that he, as President was not in the best position to convict any person accused of wrongdoing or engaging in acts of corruption. “That is the job of the courts,” he said.

He declared zero tolerance for corruption under his government, adding that due process will not be set aside in fighting the canker.

“Charity, they say begins at home and that is why so far, every single alleged act of corruption leveled against any of my appointees has been investigated by independent bodies such as CHRAJ, CID in some cases, and Parliament itself.

“There are some [people] who refuse to accept my method of proceeding and have characterised me as a clearing agent because for them, the mere allegation without more, is enough to merit condemnation of the public official even though they did not apply this principle when they were in office.

“For my part, I will not set aside due process in fighting against corruption no matter the opprobrium this incurs for me. If any appointee is cleared of any wrongdoing, the evidence adduced and recommendation made by these agencies after the investigations are concluded, I would clear the accused persons not by myself but by the institutions mandated to do so,” he added.

See also  Nabco Trainees Will Be Absorb Into Permanent Employment By October - Akufo-Addo Says
Disclaimer: MyGhanaMedia is not responsible for this report and its content.There are four types of content published on MyGhanaMedia daily: curated content; syndicated content; user-generated content; and original content.