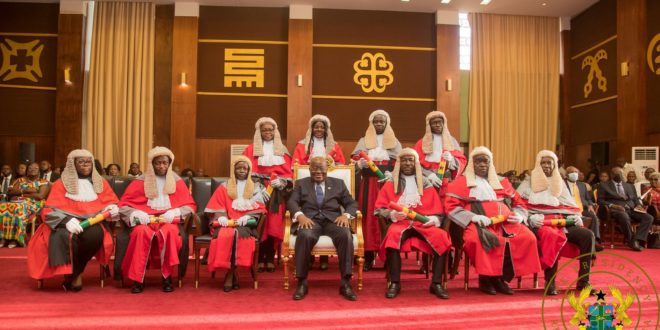 President Akufo-Addo Swears In 10 Justices Of The High Court

The President of the 4th Republic of Ghana, Nana Addo Dankwa Akufo-Addo has, on Monday, 18th July 2022, inducted into office ten Justices of the High Court.

This makes it the 5th time he is doing so since becoming President of the Republic.

The swearing in ceremony took place at the seat of government, the Jubilee House in Accra.

” They are eminently fit and qualified for the position of Justices of the High Court, and have the impartiality of mind and independence of spirit necessary to hold this high office.”

He also indicated that Government, through the Administrator of the District Assembly Common Fund, is constructing one hundred (100) new courts and bungalows for Judges in all sixteen (16) Regions of the country. Sixty percent (60%) of these courts and bungalows have been completed, and will be commissioned before the start of the legal year in October.

Three (Ahafo, Bono East and Oti Regions) out of six new High Courts, which are being constructed for the six new Regions will be completed and ready for commissioning, again, before October.

In addition to these, two hundred and ten (210) vehicles were, earlier this year, distributed to all judges in the Supreme Court, Court of Appeal, High Courts and Lower Courts.

“These are all initiatives being undertaken by Government to strengthen the capacity of the Judiciary,” the president said