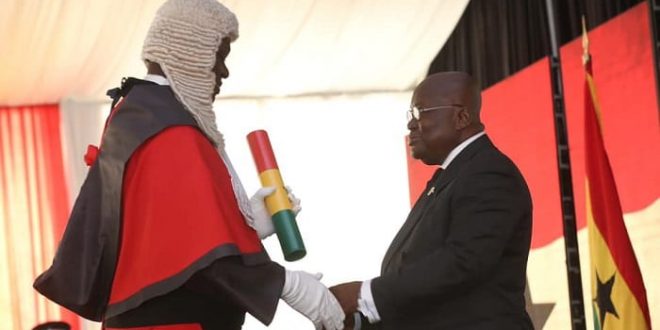 National Youth Organizer of the National Democratic Congress(NDC) George Opare Addo, has condemned the disregard for COVID-19 protocols at the funeral of the late CEO of the Forestry Commission, Kwadwo Owusu Afriyie (Sir John) by mourners including the President and the Chief Justice Anin-Yeboah who attended.

Mr Opare Addo said, President Akufo-Addo as the Commander-In-Chief who made the law on COVID-19 to safeguard the country and the Chief Justice who is the head of the judiciary for convicting offenders of the protocols should be held liable for flouting the laws they were supposed to protect.

He said if the state have prosecuted offenders of the Imposition of Restrictions Act(IRA) like the Christ Embassy saga and many other individuals who have fallen victim to the breach of COVID-19 protocols then the President, the Chief Justice and the NPP echelons who were at the congested funeral at the late former General Secretary of party must equally be held liable for the blatant breach.

Mr Opare Addo made this call in an interview with Johnnie Hughes on the New Day show on TV3, Wednesday, June 9.

He was speaking on the back of the flagrant disregard for COVID-19 protocols at the funeral of the former Chief Executive Officer of the Forestry Commission Kwadwo Owusu Afriyie at his hometown of Sakora Wonoo in the Ashanti Region over the weekend that has generated a lot of uproar in the country.

“When people say the system is working elsewhere, it is because there is certainty, our difficulty and challenge in this country is that there are two sets of laws for people in this country. What do I mean? A clear case is what we saw in Sakora Wonoo, where the President himself led a ‘brigade of lawless Ghanaians’ to participate in a funeral. Right from the word go, everybody who attended that funeral knew that that funeral was not meant for 25 or 50 people because you see, the stage was set, the number of canopies were erected, the number of chairs that put out there, clearly the organizers of that funeral did not intend to comply with the COVID-19 protocols”, he stated.

He added “if I am going to bury a beloved person and I know there is COVID and the law mandates me not to have more 50 people at the programme and then I erect canopies that has the potential of taking on board a thousand and I rent more than 500 chairs, clearly right from the beginning of it, I did not intend to go by the law, that is what we should all understand. When a President is coming to a community, the day before, the first team comes to do what is called the Recce(reconnaissance), to survey the environment to make sure everything is in place. The morning of the programme, there is an advance military team that comes to do the same job and then make sure that even the chair the President will sit on and everything is in place.

“Nobody can tell me these processes did not take place, what message did they rally back to tell the President? The mere fact that the canopies were mounted, the number of canopies we see on the screens right now that were set out, the number of chairs that have been put out there, clearly should have told the President that there was no way they were going to observe the protocol. Leadership is by example, if you are asking me not to bury my dead in the way that traditionally we do it, then I expect same from the leader. Because you see, immediately the leader flouts that law, he breaks that law, you cannot hold me accountable if I disrespect that law. Unfortunately for us as a people that is what has become the norm, so people in this government have become laws unto themselves”.

“If the President can attend a funeral and this happens and nobody is going to say anything, why is Ghana Health not speaking, why the Minister of Health is not speaking, why the police did not go there to disperse them? The police commander himself was there, so now when you go to court, the man at the apex was there so I don’t know how morally anybody can charge anybody for a breach of the COVID-19 protocols. The President and the Chief Justice, we should blame them squarely because the Chief Justice cannot exonerate himself from this. Because you see, in all this where do we seek redress, the courts, who sits at the apex of the court?