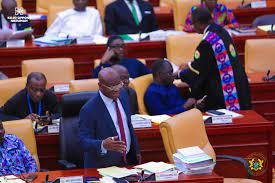 Rejection Of ‘Agyenkwa’ 2022 Budget: Majority Should Take The Matter To Court – Lawyer

Private Legal Practitioner, Musah Ahmed, has advised the Majority in Parliament to seek redress in the court over the legality or otherwise of the rejection of the 2022 budget.

“The Majority should take the matter to court if they think there has been any unconstitutional act on the part of the Minority and the Speaker of Parliament,” he opined.

Speaking on JoyNews’ ‘The Law’ on Sunday, November 28, 2021, the Head of Ahmed Legal Consult argued that the action by the Minority in Parliament is null and void, if indeed the number of MPs in the House who cast their votes on the budget was not up to half of the total number of MPs.

This comes on the back of the rejection of the 2022 Budget Statement and Economic Policy on Friday, November 26, 2021. The budget was disapproved in the absence of the Majority in Parliament.

The rejection of the ‘Agyenkwa’ budget by the Minority has been described by their Majority counterparts as unconstitutional.

Majority Leader, Osei Kyei-Mensah-Bonsu, speaking at a press briefing after the rejection of the budget argued that per the standing orders of Parliament, a decision can only be taken by the House when MPs present are more than half of the total number.

“Article 104 (1) of the constitution says matters in Parliament shall be determined by the vote of the majority of members present and voting, with at least half of all members of Parliament present. We have cause to believe that at least 2 of the NDC MPs were not in the chamber and yet out of mischief, the Speaker said that they were 137.

“In any event, even if you go with 137, it is still less than one-half of the 275 members of the Chamber. So when he puts the question, the Speaker should have known that the number would not support the decision of the House. So that purported decision is a nullity and does not have any effect on anybody,” he told the media.

The Minority has also justified their actions insisting that they acted within the remit of the law.

Reacting to this, the Legal Expert expressed the view that the constitutionality or otherwise of the rejection of the budget can only be decided in court.

“We should reserve the question as to whether this is constitutional or not to the courts to decide on that,” he said.

“The point I’m making is that, the Majority is saying that the decision by the House presided by the Speaker in their absence was invalid. The Minority is also saying that we acted within the law, we followed that procedure, and that the thing is valid. You cannot overlook it.

“When a decision is null and void, it does not mean that it can be ignored, because if an order is considered to be void, you must take a step to set it aside. So how are they going to sit down and bring closure to the matter? Unless they follow the procedures to have it either revoked by the court or use the same process in Parliament to have it undone,” he added.