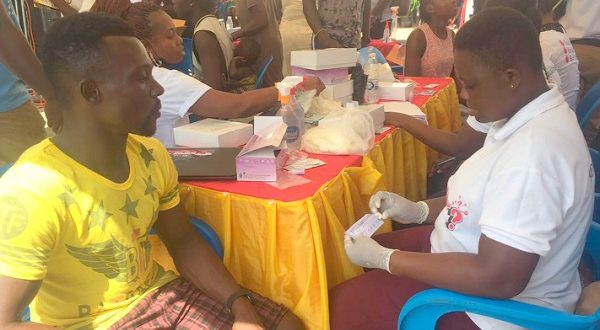 The region also had 863 new infections in the same year, representing 5.1 per cent of the national figure, with 726 being adults and 138 children.

Of all infected persons in the region, 67 per cent are on antiretroviral drugs.

He called for concerted efforts to reduce the spread and stigma associated with the disease.

Mr Yeboah noted that the fight was to remove stigma and get 95 per cent of infected persons tested and put on antiretroviral drugs.

The ceremony was used to conduct free counselling and testing for residents and to educate them on safer sexual behaviours.

The Municipal Chief Executive for KEEA, Solomon Ebo Appiah, said the assembly would commit funds towards the education and sensitisation on the disease to reduce its spread, saying the figures were extremely worrying, considering that the youth were the most infected.

He further stated that bye-laws on late funerals in the municipality would be enforced to ensure that the environment that promoted irresponsible sexual lifestyles was reduced.

In a speech delivered on her behalf, the Central Regional Minister, Justina Marigold Assan, said progress made in the national HIV response remained fragile as disparities persisted with low testing treatment services among men, children and non-pregnant women, including adolescent girls and young women.

She said HIV-related stigma also remained a formidable challenge and called on voices of the society, including traditional authorities, religious, political and business leaders and the media, to collectively speak to end stigma and discrimination against persons with HIV.

Mrs Assan advised all to desist from stigmatising persons living with the disease and be bold and get tested, saying in spite of the economic challenges, the government would ensure uninterrupted supply of antiretroviral medicines to persons living with HIV.

She indicated that the government was fully committed to addressing inequalities that held back the progress to ending AIDS as a public health threat by 2030, adding that it would work with people living with HIV and those at a higher risk of infection to remove structural socio-economic and cultural barriers hindering such efforts.

The Chief of Atonkwa, Nana Kodwo Eduakwa V, who chaired the function, urged residents of the region and Ghanaians to adopt sexually responsible lifestyles to help reduce the spread of HIV.