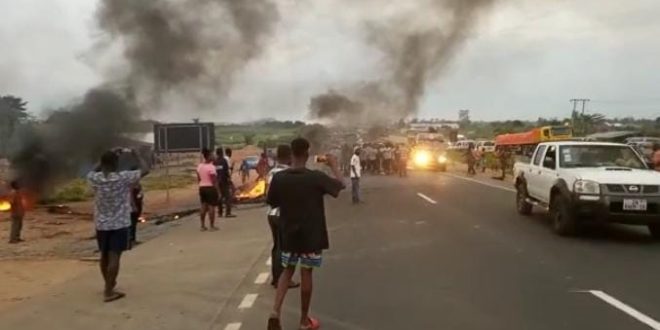 Residents of Pampaso No.1 Block Accra-Kumasi Highway Over Forced Eviction

The Residents of Panpanso No.1, a farming community near Teacher Mante along the Accra to Kumasi Highway in the Nsawam/Adoagyiri Municipality of the Eastern Region went on a rampage Monday morning after several houses in the community were illegally demolished by masked armed men at the behest of an alleged real estate developer.

The residents were asleep when some masked men suspected to be land guards stormed the village in the middle of the night and started pulling down buildings.

The affected residents alleged that some Chinese nationals were responsible for the eviction.

However, the unhappy inhabitants on Monday blocked the Accra-Kumasi highway to drum home their displeasure as they became agitated and embarked on a spontaneous demonstration.

The residents over 200 members blocked the highway with logs and stones and additionally burnt tires as the situation created gridlock on the road.

To bring the situation under control, the Police from Teacher Mante led by the District Commander ASP Francis K. Nartey rushed to the scene to meet a group of furious town folks numbering over 200 blocking the road with logs and burning lorry tires.

The police managed to convince the angry demonstrators to clear the road which they obliged.

The Public Relations Officer of the Eastern Regional Police Command, DSP Ebenezer Tetteh, confirmed that the police team visited the scene of the demolished buildings and found 11 houses pulled down with a payloader machine for no apparent reason leaving the dwellers homeless.

He said the payloader machine and most of the suspects left the scene before the arrival of the police, adding that one Dogbe, an Okada rider aged 23 years was arrested for his alleged involvement.

See also  About 1,000 Students In Kyebi Receive Ghc20 Each As A Gift From Okyenhene (Video) 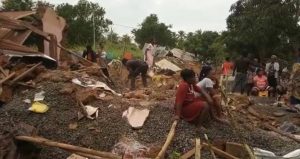 DSP Ebenezer Tetteh said efforts were being made to arrest one Kofi Acquah alleged to be the leader of the group that demolished the buildings.

Meanwhile, more than 40 persons have been rendered homeless due to the demolishing of their houses. 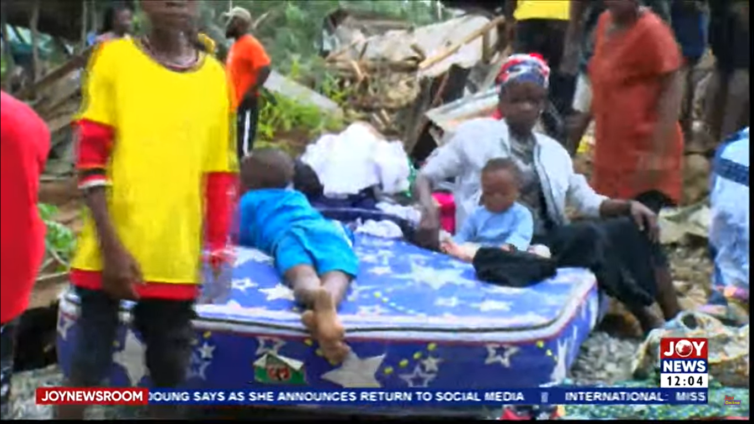 Officials of the National Disaster Management Organization, NADMO, were on grounds for assessment to facilitate emergency support for the victims.

The affected residents noted that their lights went off around 2am Sunday, and thought it was the normal ECG issue and would be restored soon, but all of a sudden, they heard gunshots.

One said “The land guards knocked on our doors, threw us out, and demolished our buildings. We don’t know what is going on. No one has told us anything”

The residents subsequently, called on the Inspector-General of Police, Dr. George Akuffo Dampare to investigate the issue.

I'm Adwenpa-Hene |Blogger & Broadcaster Journalist. I am the CEO and manager of this noble website. I publish on Entertainment, Sports, Politics, Lifestyle, and Technology. You can also follow Us on : YouTube Channel - My Ghana Media TV, Facebook - MyghanaMedia TV , Twitter - @MyGhanamedia2 & Instagram - My Ghana Media TV. Email Address: [email protected] Contact Us: 0200818719
@@MyGhanamedia2
Previous London-based EIU Projects ¢7.87 As End Of Year Rate Against US Dollar
Next EIU: NDC Can Win 2024 Elections But Not With John Mahama