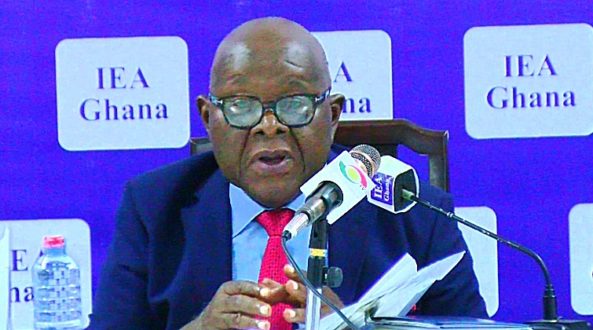 Former Speaker of Parliament and Legal luminary, Professor Aaron Mike Oquaye is calling for a review of the landmark ruling in the case of Martin Kpebu vs The Attorney General, which made all crimes bailable offences.

He said the ruling is not making the prosecution of financial and other serious criminal cases against the country any easier.

Although the former law maker believes that the position of the Constitution is in respect of human rights, he is of the view that Ghana’s bailing system needs a second look, to allow for the detention of suspects who have committed crimes of economic sabotage against the country.

He said “In a development-oriented constitution, human rights must assume a broader posture. For example, the recent controversy for the granting of bail should be regulated by the constitution. In the case of Martin Kpebu vs Attorney General, the Supreme Court opened the floodgate for granting bail. According to the Supreme Court of Ghana, the provisions of the 1992 Constitution allowed for bail for virtually every offence in Ghana. This to my mind, is not a developmental approach and must be reconsidered.”

“Economic sabotage today as we glaringly see with ‘galamsey’ for example, needs a new bail approach. Offences which are economic and undermining the economic resources that we have including gold, oil, lithium etc, and other recovery efforts should be clearly identified” he said.

Professor Mike Oquaye believes that until some of these lacunas in the law are fixed, the Constitution in its current state cannot be used as an affective tool for national development.

“Not too long ago, Dr. Modibo Ocran, a brilliant scholar who later became a Supreme Court judge wrote a thesis on Law in Aid of Development which was published as a locus classicus, made us really examine ourselves in the nature of the law if we want national development.”

“I believe that we must revisit the concept if we want our nation to grow economically in such a way that we will not revisit the IMF – in terms of our natural resources, in terms of our politics struggling ‘monecracy’ and all allied areas that this paper has attempted to examine this evening. If we do that, I believe it will be a useful contribution to our national effort in this direction,” he stated.

Professor Aaron Mike Oquaye made the remarks as the speaker of an Institute of Economic Affairs (IEA) seminar on “Reviewing Ghana’s 1992 Constitution, Ghana Beyond the 17th IMF, Our Natural Resources and Economic Challenges: The Constitutional Pathway” on Tuesday.

I'm Adwenpa-Hene |Blogger & Broadcaster Journalist. I am the CEO and manager of this noble website. I publish on Entertainment, Sports, Politics, Lifestyle, and Technology. You can also follow Us on : YouTube Channel - My Ghana Media TV, Facebook - MyghanaMedia TV , Twitter - @MyGhanamedia2 & Instagram - My Ghana Media TV. Email Address: [email protected] Contact Us: 0200818719
@@MyGhanamedia2
Previous Double Salaries Will Not Solve Our Problems – TUC Tells Government
Next “I Am Back To Perform My Duties” – Dome-Kwabenya MP