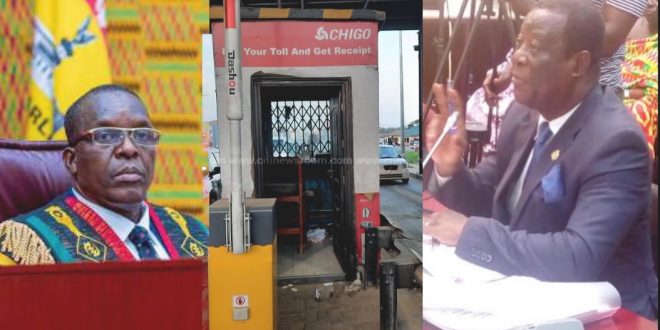 The Ministry of Roads and Highways, Mr Kwasi Amoako-Atta has clarified that its earlier statement decreeing that toll collection be stopped across the country following the abolishment of road and bridge tolls in the 2022 budget, was to intervene in the chaotic situations that occurred at the various booths.

A statement issued on Thursday November 18 explained that soon after the Finance Minister had announced the abolishment of the toll collection, some motorists misunderstood the announcement and engaged in fisticuffs with toll booth operators.

In order to stop this from degenerating, the statement said, the ministry issued the earlier directive ordering the suspension of the collection.

“It was to avert further unfortunate incidents that the ministry intervened by issuing the directive,” portions of the the statement clarifying the earlier directive said.

This comes after the Speaker of Parliament, Alban Bagbin directed the Minster of Roads and Highways, Kwasi Amoako Atta to reverse the decision to stop road toll payments in the country.

The Speaker said in Parliament on Thursday November 18 that the Minister who is also Member of Parliament for Atiwa West acted wrongly by issuing that command.

“These are policy  proposals  that the Minister of Finance has presented to the House. Until they are approved nobody has the authority to start implementing something that doesn’t exist.

“Does [the road minister’s order] amount to a disrespect  of the House?  That is where I may differ.

“The Minister of Roads and Highways, because this is not a court of law,  might have misunderstood or misapplied the law and so it is for us  to draw his attention and tell him that you have no such authority. In spite of all the legal and linguistic gymnastic that have been displayed , it is very clear that what the minister sought to do he had no such authority  to do that.

“I want to clearly direct that what the Minister  has released  is complete Brutum Fulmen, it means it is an empty boast , it has no effect  and therefore I call on him  to honorably withdraw that directive. Failure to do so  will be a serious breach of the directive of the speaker and that would amount to contempt of parliament.

Mr Kwasi Amoako-Atta, on Wednesday November 17 directed the cessation of collection of tolls on public roads and bridges effective Thursday, November 18 after the Finance Minister Ken Ofori Atta had announced in the 2022 budget statement the cancellation of the tolls.

A press release issued a few hours after the announcement by the Minister of Finance, said the directive will take effect from 12:00am Thursday.

“Motorists are kindly advised to approach the locations with caution and observe all safety measures that will be put in place,” the press release said.

But during deliberations on the floor of the House on Thursday , Minority leader Haruna Iddrisu questioned the powers that the Minister relied on to issue this directive when the budget had not been approved by Parliament.

Mr Agbodza said “It is quite clear that the Minister sidestepped parliament by pretending that he as a minister, not even the finance minister,  has the right to  waive taxes in this country. My senior colleague the road minister is a lawyer  and a very experienced one. I submit that  this action is not a mere action.

“To make it quite serious, on Tuesday Mr Speaker, your committee on Roads and Transport met  and invited the minister of roads  and transport  to work on a referral which is to build the road between Manfe and  Koforidua. At that meeting I asked  the Ministry  representative where the minister was . The response they gave me was  the Minister was on an official trip  with the president

The Minister should have known that he has no such powers.

For his part, Member of Parliament for Abuakwa South, Samuel Atta Akyea defended the Minister saying he did not disrespect Parliament and the laws by issuing that order when the budget had not been approved.

He said “Even in the Supreme Court , with the greatest of respect Mr Speaker, sometimes there is a misreading of the law which does not amount to the fact that the law lords are disrespecting the law. So at such a time that we we made that distinction we cannot attribute to the honourable Minister for Roads and Highways he is disrespecting the law.”

He added “Probably , with the greatest of respect, this could be an administrative error which should not be , It happens.”