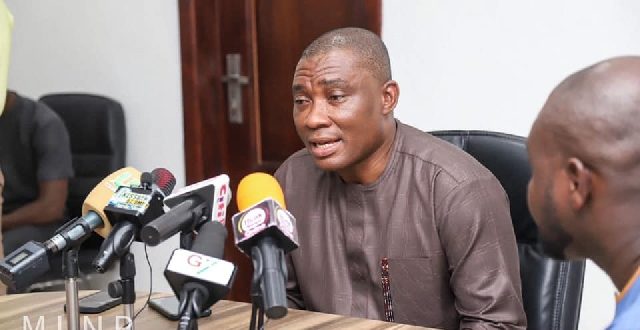 Royal Ghana Gold Refinery To Be Opened In August 2022 – Dep. Minister For Lands and Natural Resources

The Deputy Minister made this known when he paid a working visit on behalf of the Sector Minister, Samuel A. Jinapor to inspect the Refinery at the Precious Minerals Marketing Company (PMMC) premises in Accra, on Tuesday, 28th June, 2022.

Mr Duker highly commended the team at PMMC saying that he is impressed with the work done and particularly happy that the vision of the President Akufo-Addo led government, to add value to the various Minerals produced in Ghana is on course with the completion of the Refinery.

“As we have a Refinery here in Ghana, the value addition goal of the President will be met and this tells you that we are going to expand the base, we are going to add more value and more importantly, Gold would not be exported in the raw form.”

He assured that government through the Lands Ministry will tick all boxes to ensure that the state-of-the-art refinery is not a “white elephant” but is put to the intended purpose for the country to benefit fully from its proceeds.

Mr Duker hoped that the Refinery although currently being operated by foreign Nationals, will soon create more jobs for the Ghanaian youth through knowledge sharing and also add value to gold produced in Ghana as is the goal of the President Akufo-Addo led government.

The Mines Deputy Minister stressed that the Ministry is interested in building local champions to set up and own Mines that will rub shoulders with those of international standards like Newmont and Anglo Gold Ashanti.

He hammered on traceability and charged officials of PMMC to ensure that the Minamata convention on Mercury is met at all cost in the process of utilising the refinery.

Having taken a quick tour of the premise, he disclosed that the Refinery has already taken a test of processing the raw gold “and the result I must say are of very good standards, 99.9% pure. Very similar to what we saw in South Africa on our last trip to a Gold mine there”.

See also  Akufo-Addo Leaves For Brussels, Belgium And Other 2 Countries

The Managing Director of Precious Minerals Marketing Company, Mr. Nana Akwasi Awuah for his part, expressed his appreciation to the Deputy Minister for his involvement and efforts in securing the reduction of the 3% withholding tax on Gold exports.

He reported to the Deputy Minister that the reduction from 3% to 1.5% has been of immense benefit as the industry has seen a good increment in production and profit since the beginning of the year.

“In December 2021, we did less than 200 kilograms of Gold but when the reduction took effect in January this year, that figure shot up to over 100% where we did over 400kilograms which means that it is having a positive impact.”

He added that he is also elated that through the efforts of H.E the President, the country has the first working gold refinery with state participation in-country which will add value to the ore mined.

The Refinery, known as the Royal Ghana Gold Refinery whose construction begun in 2019, has the capacity to Refine from 300 to 500 kilograms per a day through chemical and electrical methods.

Some facilities available at the Refinery include the Control room, the Scanner, the Refinery section which has the Electrolycis machine, the Moulding room and the Assay laboratory, among others.

I'm Adwenpa-Hene |Blogger & Broadcaster Journalist. I am the CEO and manager of this noble website. I publish on Entertainment, Sports, Politics, Lifestyle, and Technology. You can also follow Us on : YouTube Channel - My Ghana Media TV, Facebook - MyghanaMedia TV , Twitter - @MyGhanamedia2 & Instagram - My Ghana Media TV. Email Address: [email protected] Contact Us: 0200818719
@@MyGhanamedia2
Previous We’ll Know Whether Those Who Threw The Stones Are Police Officers During Prosecution – Information Minister
Next Arise Ghana To Police: Release All Images Of 12 Injured Officers