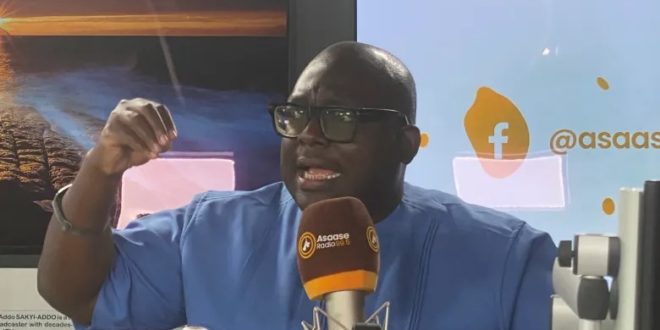 Samoa Addo: NDC Is “Lazy” In Demonstrating Against Economic Hardship

His comment comes after an Accra High Court restrained the organisers of the intended armed demonstration from hitting the street on 4 June.

Speaking on Asaase Radio’s news analysis and current affairs show – The Forum – on Saturday (4 June), Samoa Addo who doubles as a staunch member of the NDC said the Umbrella family has been lazy in demonstrating against the current economic hardship in the country.

“The NDC as it is now is a lazy opposition and our party leaders have to sit up. They have to deal with this government the way they ought to and that’s massive demonstrations.

“If the NDC were in power and the economy is as it is now and things are not well, what will the NPP be doing? They’ll be on the streets everyday!” he said.

Addo added: “So anybody who wants to go on the streets and draw the government’s attention to the fact that times are hard, the person has my 100% support.”

Talking on the same programme, the deputy CEO of the National Youth Authority (NYA), Akosua Manu (Kozie) described the decision by Arise Ghana to demonstrate with arms as unnecessary.

“When I saw the armed part in the statement, I thought it was a joke. Their leader is someone who romanticise coups.

“On Bernard Mornah and his group, we know he’s been pretty consistent with his protests but it’s important to know the times we’re in. Less than two weeks ago, the national security was telling us about the threat of terrorism,” she said.