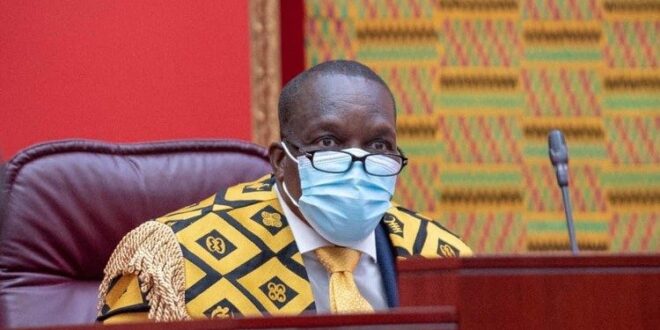 The Speaker of Parliament, Alban Sumana Bagbin has recounted how wearing a seatbelt saved his life in three separate “near-fatal accidents”.

The Speaker observed that though in all incidents he was in high-end four-wheel drive vehicles, none of them could be recovered after the accidents.

He made this revelation when the leadership of JoyNews visited him in his office to officially present copies of the documentary, Crushed.

“Members of Parliament are always on the move, so I had about three near-fatal accidents but survived because I obeyed one of the guiding rules of a passenger; putting on my seatbelt.

“On all three occasions, even though I was using Land Cruisers, none of them could be recovered but I came out unhurt because the belt held me to the seat,” he narrated.

The Speaker, therefore, advised that drivers and passengers should always prioritise the usage of seatbelts to save lives, stressing that “it is very important”.

Mr Bagbin also vowed to ensure that Parliament drafts a proposal to holistically deal with the carnage on the country’s roads.

“Road accidents even kill more than HIV/AIDS, it is just that not all are reported and recorded and I think as a country, we need to take a very serious view of it.

“Personally, what I think I can do to support it, I will do. And I will also want to get the opportunity for the House to, at least, take some action about the matter.”

Road accidents have over the years been of grave concern to society because thousands of Ghanaians have lost their lives as a result.

The situation as of now is very worrying, hence, the Joy cluster of The Multimedia Group is embarking on a campaign dubbed #ArriveAlive to help reduce the spate of the menace drastically.