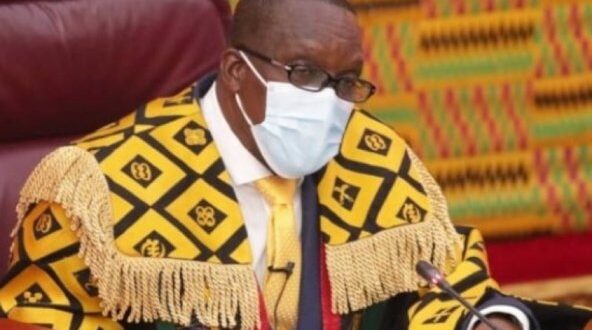 Speaker of Parliament, Alban Sumana Kingsford Bagbin has issued a notice to the judiciary to respect the parliamentary privileges and immunities of Members of Parliament in accordance with Articles 117 and 118 of the 1992 Constitution.
According to him, officers of the Judicial Service had attempted to serve process on MPs in the precincts of Parliament during the first meeting of the eighth Parliament which processes had to be returned to the Registrars.

He said to ensure that the situation was contained, he had formally written to draw the attention of the Chief Justice to the non-compliance with the provisions by officers of the Judicial Service.
Speaker Bagbin made the observation in a formal communication to Parliament on matters arising out of the enforcement of Article 117 and 118 of the 1992 Constitution.

He said he did not take kindly to that conduct and highlighted same to the Chief Justice, saying such conduct for him was unlawful, unconstitutional and amounted to an interference with the work of Parliament and would not to be countenanced.

Speaker Bagbin also stated to the Chief Justice by a letter dated 22nd February, 2021 respectfully acknowledged the breaches of the Constitution by officers of the Judicial Service and reiterated the position he outlined.
He said the Chief Justice went further to assure him of his immediate action to halt the practice and proceeded to do just that in a circular and provided him with a copy of the circular which directed that the provisions in Articles 117 and 118 be respected by all judges and court officers.

He said the circular also reminded the Court officials that the Speaker, MPs and the Clerk to Parliament shall not be served with any process of any court or compelled to appear as a witness in any court unless Parliament is not in session or the Speaker so certifies that the office holder in question is not on his way to attending at or returning from any proceedings of Parliament.