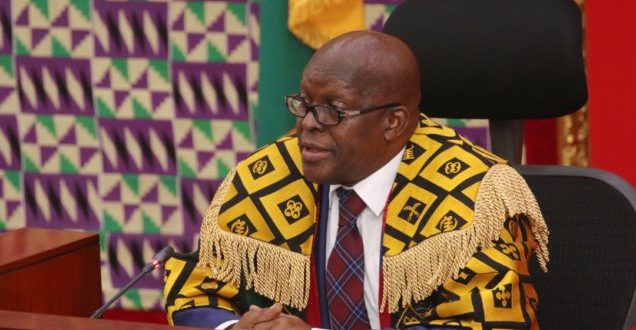 Speaker Suspends Sitting Over Majority Caucus’ Absence In The Chamber

The Speaker of Parliament, Alban Bagbin, says he was not informed that the Majority were having a Caucus meeting.

Even though the NDC Caucus protested against the suspension, the Speaker resolved to suspend the House.

“I have just been informed that the Majority side wants to have 30 minutes meeting of the caucus. They have alleged that I was informed; that definitely is untrue.

“I was informed early in the morning that both caucuses were having meetings that I am aware of. However, nobody came to inform me that they (Majority) were having a caucus meeting, so that is why I came to preside only to realize there was nobody on their side.”

Members of Parliament from the Minority side of the House have accused their counterparts from the Majority of holding Parliament hostage over their lack of numbers.

This comes three clear hours after the advertised 10 am of sittings to begin.

With the debate on the budget expected to be climaxed on Friday, November 26, 2021, the nation is on tenterhooks over whether the policy document will be approved or rejected.

Already the Minority MPs have served notice they will reject the document due to the introduction of “obnoxious” taxes, which they argue will further compound the hardship of the ordinary Ghanaian.

See also  Full Judgement: No Arm Of Government Including Parliament Is A Law Unto Itself – Supreme Court

On the other hand, the Majority argues the budget portends hope as it will create millions of jobs for the teeming unemployed youth.

But with the Majority side of the House still empty after more than three hours, members of the Minority have had cause to worry over the development.

“So I will plead with you for us to just suspend the sitting for 30 minutes,” the Speaker pleaded.

“If you will not take the plea, I have decided that we will suspend sitting for 30 minutes and then we will now come as a House not half of the house to conclude the debate on the Government Economic Policy and Estimate for the Financial Year 2022,” he noted.

I'm Adwenpa-Hene |Blogger & Broadcaster Journalist. I am the CEO and manager of this noble website. I publish on Entertainment, Sports, Politics, Lifestyle, and Technology. You can also follow Us on : YouTube Channel - My Ghana Media TV, Facebook - MyghanaMedia TV , Twitter - @MyGhanamedia2 & Instagram - My Ghana Media TV. Email Address: [email protected] Contact Us: 0200818719
@@MyGhanamedia2
Previous Livestream: #NSMQ 2021 Finals – Presec, Prempeh And Ketasco Battle For Trophy And Glory
Next Bagbin To Minority: I’m Being Insulted Because Of You