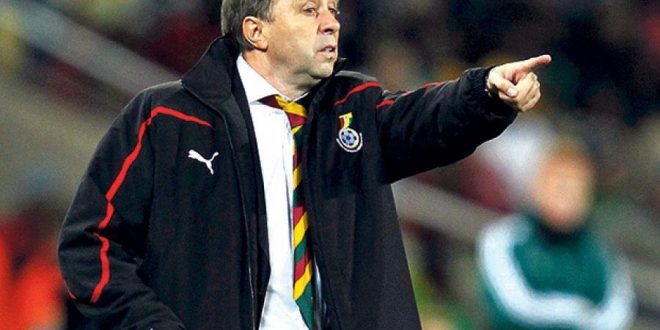 The Ministry of Youth and Sports  has denied reports that it has given its approval for the appointment of Milovan Rajevac as the new head coach for the Black Stars.

Last Monday, it was reported that the Serbian tactician had arrived in Ghana to take charge of the vacant Black Stars job.

Subsequently, information gathered revealed that the Sports Ministry after a meeting with the Ghana FA approved the appointment of Milovan Rajevac and agreed a monthly salary of $45,000 for the coach.

In a statement released by the  Ministry of Youth and Sports, has denied reports it has approved a deal worth $45,000 per month for Milovan Rajevac to assume the role as Ghana coach.

The Serbian is days away from being announced as Charles Akonnor’s successor.

He will be assisted by Otto Addo and one other whose name is unknown yet.

But ahead of his official announcement, there have been reports that Milovan and GFA reached an agreement that will see the Serbian sign a two-year contract and will be paid a monthly salary of $45,000.

But the Sports Ministry, which pays the national team coach, has stated categorically that the reports are “untrue and of no basis”.

Part of a statement issued by the Public Relations Unit read: “Much as the Ministry is aware of the process of engaging a new coach for the Black Stars by the GFA, the process has not been brought to the attention of the Ministry.”

“We wish therefore to state categorically that the publications that the Ministry has agreed to pay $45,000 for the Coach of the Black Stars are untrue and of no basis.

“It must be noted that the Ministry is awaiting the report of the Ghana Football Association (GFA) on the engagement of a new coach.”

It entreated the general public to disregard any such publications and treat it with the contempt it deserves.

“The Ministry will make it public when a decision is taken on who the new coach will be and his remuneration and conditions of service.”

Rajevac will be in the dugout for his first games early next month when the Black Stars come up against Zimbabwe in a home-and-away doubleheader World Cup qualifiers.

The first match will be played in Cape Coast on Saturday, October 9 with the return leg scheduled for Harare on Tuesday, October 12.

Both games are must-wins for the Black Stars in their bid to displace South Africa at the top of Group G.

I'm Adwenpa-Hene |Blogger & Broadcaster Journalist. I am the CEO and manager of this noble website. I publish on Entertainment, Sports, Politics, Lifestyle, and Technology. You can also follow Us on : YouTube Channel - My Ghana Media TV, Facebook - MyghanaMedia TV , Twitter - @MyGhanamedia2 & Instagram - My Ghana Media TV. Email Address: [email protected] Contact Us: 0200818719
@@MyGhanamedia2
Previous Okudzeto Ablakwa: Total Cost Of Akufo-Addo’s Private Jet Travels Can Acquire A New Aircraft
Next Check Out Where To Receive 1st And 2nd Dose Of Covid-19 Vaccine From Sept. 24 To 29