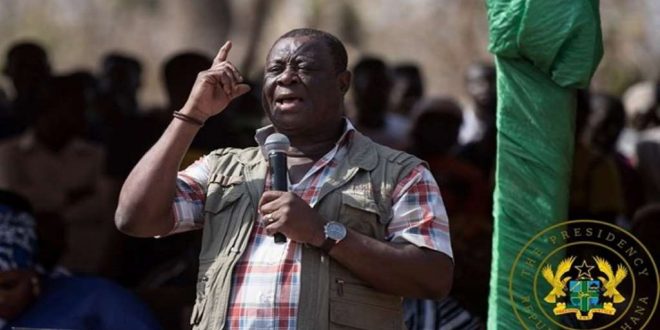 The Ministry of Roads and Highways has directed the immediate discontinuation of the collection of tolls on all public roads and bridges across the country.

This order according to a statement signed by the sector Minister, Kwasi Amoako-Attah is to take effect from Thursday, November 18, 2021, at 12:00am.

It follows the announcement by the Finance Ministry of the scrapping of tolls on all public roads.

“The Ministry of Roads and Highways hereby directs the cessation of the collection of road and bridge tolls at all locations nationwide.”

Police personnel from the Motor Traffic and Transport Department (MTTD) are to be stationed at various toll booths to provide security.

In the meantime, the statement has urged motorists to obey the instructions of the security agents.

“The motoring public will be advised of further measures in due course”, the release further said.

The government has announced the abolishment of tolls on all public roads in the country.

This was announced in the 2022 budget statement and economic policy presented by Ken Ofori-Atta, the Finance Minister before Parliament on Wednesday, November 17, 2021.

According to the minister, the government has observed that toll booths are doing more harm than good, hence the need to remove them.

He said, toll booths cause heavy traffic and impact negatively on productivity.

The decision is to take effect with the approval of the budget.

“To address these challenges, the government has abolished all tolls on public roads and bridges. This takes effect immediately after the budget is approved,” the Finance Minister said.

He noted that persons manning the various toll booths will be reassigned by the government.

Ahead of the budget reading, there were speculations that the government may increase road tolls as it seeks to raise domestic revenue.

Some also suggested the removal of the tolls to be replaced with a one-time payment at the point of vehicle road-worthy renewals.

The monies raised from tolls are typically meant for fixing and maintaining public roads.

Some have argued that the road tolls have failed to help in improving the state of roads in the country and rather leading to nuisances such as traffic congestion.

Ken Ofori-Atta in presenting the budget said, although the tolls were helping in fixing and maintaining roads, the benefits of not having them currently outweighs their purpose.

“Our roads need fixing. Our roads are being fixed. It is true that more roads have been fixed and are being fixed over the last five years than any relative period in the entire history of our nation. We even want to do a lot more and this budget will cater for this. That is why for decades, Government after Government imposed and maintained tolls on some public roads to raise funds for road construction and maintenance.”

“This is the situation in many countries. However, over the years, the tolling points have become unhealthy market centres, led to heavy traffic on our roads, lengthened travel time from one place to another, and impacted negatively on productivity. The congestion generated at the tolling points, besides creating these inconveniences, also leads to pollution in and around those vicinities,” the Minister said.

It has also announced a 15 percent increase in the cost of all government services.

I'm Adwenpa-Hene |Blogger & Broadcaster Journalist. I am the CEO and manager of this noble website. I publish on Entertainment, Sports, Politics, Lifestyle, and Technology. You can also follow Us on : YouTube Channel - My Ghana Media TV, Facebook - MyghanaMedia TV , Twitter - @MyGhanamedia2 & Instagram - My Ghana Media TV. Email Address: [email protected] Contact Us: 0200818719
@@MyGhanamedia2
Previous No Additional Tax On Fuel – Oppong Nkrumah
Next Nat’l Security Minister To Be In Parliament To Answer Question On Akufo-Addo’s Foreign Travels