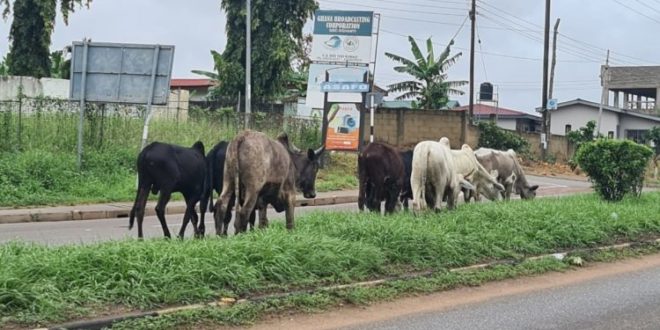 Stray Cattle Cause Nuisance In Kumasi

Herds of stray cattle have been causing nuisance in Kumasi, the Ashanti Regional capital, in recent times.

Hardly would a day pass by without stray cattle roaming the streets of the city.

In some instances, the animals, who are without caretakers, are usually seen grazing freely in the median.

There have been other times where the stray cattle were spotted walking majestically in some of the busy roads causing vehicular traffic.

Some residents of Kumasi have complained bitterly about this spectacle and called for a stop to it. But despite the complaints, the stray animals continue to roam about freely in some busy roads in Kumasi.

On Monday morning, DAILY GUIDE spotted some stray cattle grazing in the middle of the Asafo to Asokwa road.

Some of the animals were even seen walking in the busy streets, posing danger to road users.

Unfortunately, the huge animals were on their own as no caretaker was seen around them.

Some of the people at the scene, strongly condemned the city authorities for sleeping over their work so far.

According to them, the city has been dirty and full of stray animals, which dent the image of Kumasi, as the animals in most cases, leave their droppings on the road.

They said the presence of the animals in the streets alone was a clear sign that the city authorities have failed.

“The city authorities should be removed from office,” Kwaku Manu of Asafo, who was very angry, screamed.

Speaking with the paper, he said nothing was going right, with regards to the management of the city nowadays.

“How can humans share a busy road with these huge animals? This is incompetence”, Akua Gyasi of Asokwa, also stated.