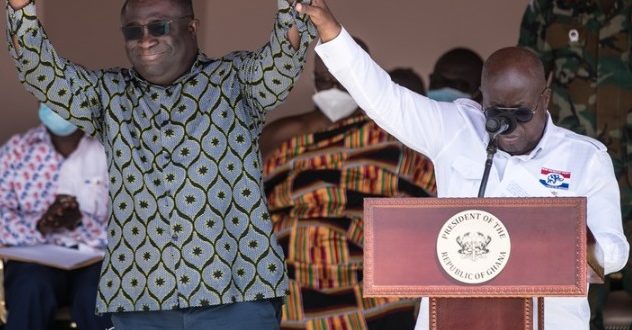 Subin MP To Akufo-Addo: NPP Should Deploy ‘The Men’

The Member of Parliament for Subin, Eugene Antwi has called on President Akufo-Addo to deploy ‘the men’ the New Patriotic Party (NPP) has to replace the Finance Minister, Ken Ofori-Atta.

During the 2012 and 2016 electoral campaign, then presidential candidate Akufo-Addo touted the availability of ‘the men’ in the NPP who will be able to manage the economy better than the NDC if given the opportunity.

Speaking in an interview on Asempa FM’s Ekosiisen on Tuesday, Mr. Antwi said indeed, NPP has the men and women, therefore he should assign them in place of the Finance Minister and the Minister of State in charge of Finance at the Finance Ministry, Charles Adu Boahen.

“NPP we have the men, we have the men, yes, we do have the men so let’s deploy them. Why do we behave like we are the second-rate political party in Ghana? What has someone learned, what exposure does one have that others do not? he quizzed.

According to him, the NPP is running a political party and not a family dynasty therefore the Minister should be sacked.

His remarks come after some New Patriotic Party (NPP) lawmakers demanded that Ken Ofori-Atta be fired as Finance Minister.

The MPs, numbering about 80, held a press conference to impress on the President to relieve his cousin of the responsibility of managing the national purse or risk losing their support for government business going forward.

According to Mr. Antwi, the Majority of MPs will not sit for a few people to bring the party to its knees.

“Unless they kill all of us, we will not allow it. If we have to come out we will come out, that is why this happened today. It’s not about individuals, we are asking for the President to do just a simple thing for us, just let them step aside, bring others to see how the economy will react,” he stated.

He said the time has come for President Akufo-Addo to act, ‘if not, then the MPs will advise ourselves by not partaking in government business.”

“We want Ghanaians to know that we are taking a stance and we want the President to listen to us,” he added.

Meanwhile, the Deputy Minority Whip, Ahmed Ibrahim, has said his side has already filed a motion of censure against the Finance Minister, Ken Ofori-Atta.

The Banda Ahenkro MP at a press briefing in Parliament on Tuesday, said both Majority and Minority leaders have already commenced discussion about the vote of censure against Mr. Ofori-Atta.

“The Honourable Haruna Iddrisu said it in a business committee yesterday. The motion is ready, he did not want to surprise the Majority Leader,” Mr. Banda said.