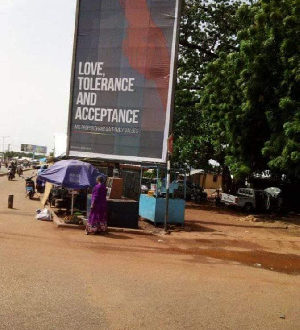 Residents of Tamale have pulled down a billboard purported to have been promoting tolerance, love and acceptance for members of the LGBTQ+ community in the town.

Residents woke up on Tuesday, May 14, 2022, to see the huge billboard mounted at a popular junction known as ‘Banjira Junction’ at Agric, a suburb of Tamale.

The billboard had the inscription, “Love, Tolerance and Acceptance are proper Ghanaian family values written boldly and underlined with rainbow colours.

“#WeAreAllGhana” was written beneath the above-mentioned inscription with two hands, in opposite directions, shaking each other.

This angered many residents who threatened to pull it down.

At about 5pm on Tuesday, some residents massed up, pulled down the billboard, and burnt it up.

Some residents who wanted to remain anonymous told GhanaWeb’s Northern Regional Correspondent that they pulled down the billboard to send a signal to promoters of the rights of the LGBTQI+ to stay away from promoting their activities in the township.

“We want them to know that we will not entertain this nonsense, they are even lucky that we didn’t see the people who mounted the billboard” he said.

“We will not only pull this down but next time we find anybody mounting any such billboard or openly campaigning for this nonsense, we will deal with them,” he threatened.

Another resident said they would not hesitate searching for the individuals who mounted the billboard.

“We’ll get them. The billboard was mounted this morning. The guy who was in charge is in Tamale. We need identification” the angry resident said.

Other questioned who gave the promoters the permit to mount the billboard in Tamale, whilst calling for the arrest of such persons.

Before the billboard was brought down, Member of Parliament for Ningo Prampram, Sam Dzata George called on residents to take down the billboard before nightfall.

“To all the faithful and patriotic nationalist in Tamale, your Nation demands your devotion. Take down the Billboard before nightfall. It is your civic duty to protect the Constitution.

The MP himself had spoken against a similar billboard in Accra last week and ordered that the Police Service work towards pulling it down.