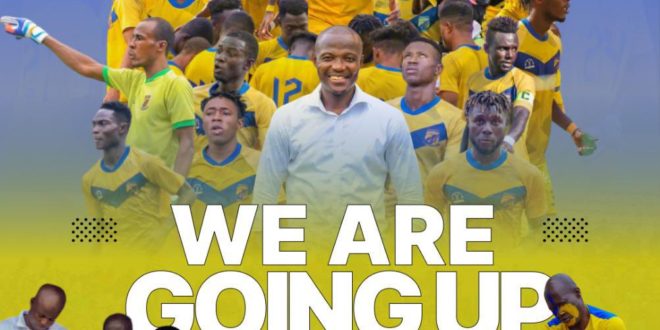 The Northern based club, Tamale City FC  have booked a place in the Ghana Premier League for the 2022/23 campaign following a 1-1 draw with Ebusua Dwarfs at the Accra Sports Stadium on Monday.

Isaac Mensah’s goal for Tamale before the half-hour mark was cancelled out by Richard Addai in the first half.

Tamale City came into the game needing just a point to qualify after beating Liberty Professionals in the first game.

Ebusua Dwarfs on the other hand suffered a 3-1 loss at the hands of Liberty Professionals.

The game was a balanced one until the referee blew his whistle for a penalty in favour of Tamale City.

Congratulations to our Northern brothers Tamale City FC on your promotion to the Ghana Premier League @GhanaLeague !!! We are proud of you!🙏 pic.twitter.com/f9eBIjTBj0

Isaac Mensah stepped up and gave his side the lead but about ten minutes later, Richard Addai levelled matters from the spot.

Both teams created some opportunities in the second half but none of them managed to find the net, securing Tamale City’s place in the Ghana Premier League for next season.

They will replace Ashanti Gold, who have been demoted to the Division Two League by the GFA following match manipulation charges.