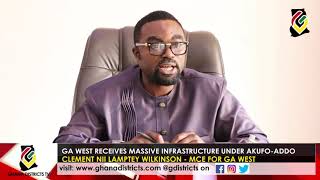 The Ga West MCE, Hon. Clement Wilkinson, has pleaded with media houses to use their platforms as a tool for development in the country.

According to him, the media should assist the government in developing the country by reporting on the good policies and works they have implemented.

Speaking in an interview with Abena Opokua Ahwenee on Dadi FM, 101.1, he stated that the media makes their work difficult because they seem to report on just the negatives.

“The media only add their voice when there is a problem but when we find solutions they don’t help us to broadcast it to the general public”, he said.

About the huge traffic drivers and passengers have to endure on the Pokuase-Amasaman road; he revealed that the traders by the roadside have been sacked. This he said was done to reduce the traffic on the road until the contractor resumes and completes the work.

“We have sacked all the traders on the road because that also aids in causing traffic at the area “, he revealed.

He added that this action has attracted several insults from the public and some journalists thus his statement that media houses make the work of the government difficult.

“After we sacked these traders, I have received several insults from a journalist, media men, and the public at large and this doesn’t help the country to develop. The media makes our work difficult”

He said that the media is indeed a powerful tool in developing the nation but they hardly promote good works in the country.

“If media houses can announce every day about these traders not selling on the roads or by the roadsides then they will be alerted that everyone in this country is involved in making the country better”, he added.

I'm Adwenpa-Hene |Blogger & Broadcaster Journalist. I am the CEO and manager of this noble website. I publish on Entertainment, Sports, Politics, Lifestyle, and Technology. You can also follow Us on : YouTube Channel - My Ghana Media TV, Facebook - MyghanaMedia TV , Twitter - @MyGhanamedia2 & Instagram - My Ghana Media TV. Email Address: [email protected] Contact Us: 0200818719
@@MyGhanamedia2
Previous Gov’t Spent GH¢8,134 Million To Preserve Livelihoods During COVID-19 Period – Ken Ofori Atta
Next It Will Cost Government US$10 Billion To Fix All Roads In Ghana – Ofori-Atta