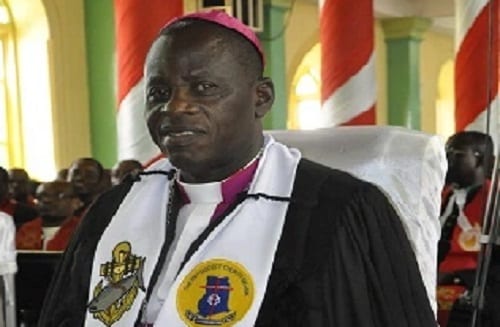 The Taxes Are Killing Us – Methodist Bishop To Akufo-Addo

The Bishop of the Sekondi Diocese of the Methodist Church of Ghana, Right Reverend Daniel De-Graft Brace, has berated President Nana Addo Dankwa Akufo-Addo and his government for failing to honour promises made to the Ghanaian electorate in his search for political power.

He explained, for example, that during the campaign period ahead of the 2016 elections, then Candidate Akufo-Addo chastised the Mahama administration for bad leadership, which had resulted in brazen hardship even though the country was well endowed, according to the then opposition leader.

“When the President was campaigning in 2016, I was in Abosso. He came there and his words were that there is money in this country, but because we don’t have the right people governing the country, it has resulted in brazen hardship. So many taxes have been heaped on us. So, I in particular agreed with him that this country is endowed and that if we get our acts right, things will be okay.”

But, according to Most Reverend DeGraft Brace, who was speaking to journalists on the sidelines of the 60th Synod of the Sekondi Diocese at Dixcove in the Ahanta West Municipality, nothing significantly different has changed since President Akufo-Addo ascended the Presidency, stressing that “rather new taxes have been introduced and causing more hardships”.

“…now what he has introduced is rather causing a lot of hardships. People are suffering and we need to hit it that [President Akufo-Addo] must do something about it.

“It is true that the coronavirus has damaged the world economy but if you look at what is happening, I believe government must do something about it.”

He added: “The taxes are too many and it has brought a lot of hardship.

“Look at fuel, the price has increased about five times since the beginning of this year, why? But during the campaign period in 2016, they promised that all these things will be cancelled. But rather it is still increasing and I believe government must rethink and do something to help to change things.”