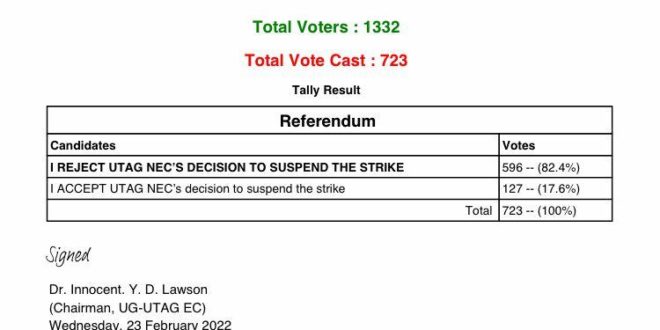 UG, UEW Chapter Of UTAG Votes Against Suspension Of Strike

In a referendum, 596 members voted to reject UTAG’s decision to suspend the strike, while 127 members voted in support of the suspension.

UTAG called off its almost seven-week-old strike after several appeals by the government, the education committee of Parliament, student unions, Vice Chancellors Ghana, as well as a ruling by an Accra High court. 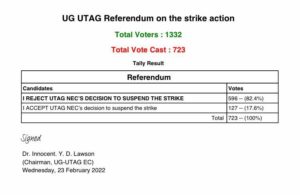 After a National Executive Committee (NEC) meeting, the Association resolved to resume negotiations till March 4, 2022.

The University of Education, Winneba Chapter of UTAG earlier also voted against its National Executive Committee’s decision to suspend the strike.

Vice President of UTAG-UEW, Dr. Pascal Kpodo had said it is waiting for other campuses to vote on the matter within five days.

“These resolutions will go back to NEC, and they would take a decision. While this voting is ongoing, we are hoping to reach an agreement with the government on how to better the conditions of service of the UTAG members. If that agreement is reached, the voting done by the universities will be null and void,” he said.

I'm Adwenpa-Hene |Blogger & Broadcaster Journalist. I am the CEO and manager of this noble website. I publish on Entertainment, Sports, Politics, Lifestyle, and Technology. You can also follow Us on : YouTube Channel - My Ghana Media TV, Facebook - MyghanaMedia TV , Twitter - @MyGhanamedia2 & Instagram - My Ghana Media TV. Email Address: [email protected] Contact Us: 0200818719
@@MyGhanamedia2
Previous It Is Illegal, Unconstitutional And Offensive For 1st Deputy Speaker To Overturn My Ruling – Alban Bagbin
Next Russia-Ukraine Territorial Conflict: Safeguard Of Ghanaian Students Studying In Ukraine And Russia – NUGs To Gov’t