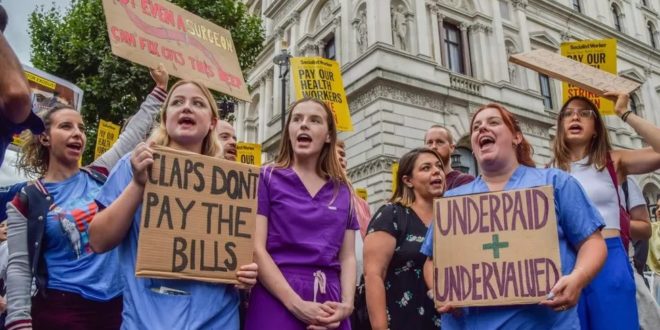 Nurses in England, Wales and Northern Ireland are to go on strike from 08:00 on Thursday in the largest action of its kind in NHS history.

Staff will continue to provide “life-preserving” and some urgent care but routine surgery and other planned treatment is likely to be disrupted.

The Royal College of Nursing said staff had been given no choice after ministers refused to reopen pay talks.

The action will involve nurses in around a quarter of hospitals and community teams in England, all health boards in Northern Ireland and all but one in Wales. Nurses are not striking in Scotland.

Under trade union laws, the RCN has to ensure life-preserving care continues during the 12-hour strike.

Chemotherapy and kidney dialysis should run as normal, along with intensive and critical care, children’s accident and emergency and hospital neonatal units, which look after newborn babies.

Beyond that, it will be up to NHS boards and trusts to negotiate services on a local level, with discussions likely to come down to the circumstances of some individual patients.

The biggest impact is likely to be in pre-booked treatment such as hernia repair, hip replacements or outpatient clinics.

The NHS has said it is “vital” people continue to come forward for emergency care during the strikes and anyone not contacted to reschedule an appointment should attend as planned.

The RCN balloted more than 300,000 nurses across individual NHS trusts and boards rather than in a single, national vote.

This means some nurses are not entitled to take industrial action, because the turnout in their local area was too low.

In England, the first round of strikes will go ahead in 51 of 219 hospitals, mental-health trusts and community services.

Strikes are also going ahead in all of Northern Ireland’s health boards and all but one in Wales, the Aneurin Bevan.

Most GP services will be unaffected, as nurses working directly for practices were not entitled to take part in the vote, but the strike will include district nurses working in people’s homes or community settings.

A second day of strike action will go ahead on 20 December, unless there is a breakthrough in talks.

I'm Adwenpa-Hene |Blogger & Broadcaster Journalist. I am the CEO and manager of this noble website. I publish on Entertainment, Sports, Politics, Lifestyle, and Technology. You can also follow Us on : YouTube Channel - My Ghana Media TV, Facebook - MyghanaMedia TV , Twitter - @MyGhanamedia2 & Instagram - My Ghana Media TV. Email Address: [email protected] Contact Us: 0200818719
@@MyGhanamedia2
Previous Special Prosecutor And His Staff Are Yet To Receive Salary After 16 Months In Office
Next GES Delays Vacation Of Basic Schools; This Is Why