The leadership of the University Teachers Association of Ghana (UTAG) has held an emergency meeting, which culminated in a decision to suspend the seven-week old strike.

According to a press release issued on Monday, February 21, UTAG’s National Executive Committee (NEC) considered a number of factors before coming to the decision.

At the meeting, NEC of UTAG resolved as follows: “that UTAG should heed to the advice of the eminent leaders, the Select Committee on Education and the court ruling to suspend our strike action up to 4th March, 2022 to engage with government”.

UTAG strike suspension: Management of the various universities will come up with dates on when lectures resume – Dr. Samuel Kusi. #AMShow

The National Executive Committee (NEC) Of UTAG has decided to suspend it's 40+ days strike for negotiations to commence and end in two (2) weeks. UTAG members have 5 days to vote to accept or reject this decision by NEC.

This is all according to UG UTAG president Prof. Gyampo. pic.twitter.com/PAnStUTBcW

The latest decision will have to be voted on by the entire membership as per Article 5, Sections 1-4, of the bye-laws of UTAG.

Already, by the statement, UTAG is calling on all its members to take note of the latest decision.

Meanwhile, the Association says the legal processes over the legality or otherwise of their strike is a matter it will pursue to the conclusion. 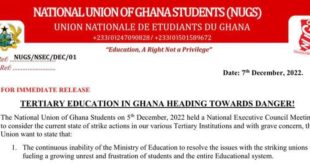 NUGS To Gov’t : Tertiary Education In Ghana Heading Towards Danger