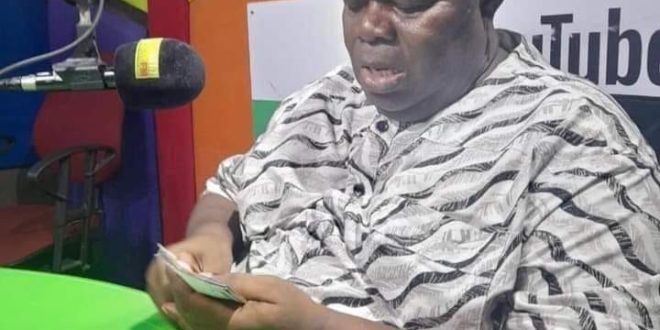 According to the source, he pass on this morning, Friday,April 8, 2022 at his residence.

According to reports, he was diagnosed with end-stage heart failure recently which placed a limit on his lifespan.

According to a Facebook post by sports journalist and Spokesperson/Personal Aide To The Minister at Ministry of Youth & Sports-GH,  Kofi Asare Brako, Abatey, the taxi driver famed actor passed away at his Ayikuma home.

The sports journalist in his own words wrote; Rest in peace, Psalm Adjeteyfio, a.k.a.

.The veteran Ghanaian actor Psalm Adjeteyfio revealed a couple of weeks ago that he has been diagnosed with end-stage heart failure which has indirectly placed a limit to his lifespan.He passed away this morning at his Ayikuma home, the source said.

He received numerous help from various sources but invariably found ways to squander the money and come back for more.

Psalm Adjetefio widely known as T.T is a veteran Ghanaian actor who began his career as a trained teacher at the PRESEC staff school tutoring pupils, the Ga language.

His starring role in Taxi Driver, where he appeared alongside Mikki Osei Berko (Master Richard), George Quaye (Aboagye), and others, made him a household name.

Recounting how he got into acting, he remembered when he was invited by Emmanuel Appea to star in a movie after a recommendation by a very good friend who saw his ability to interpret characters very well and that landed him that role.

He admits that he was paid 50ghc equivalent back then for his role.

According to him, that money could change one’s life at the time but was refused that amount.

Emmanuel Appea the producer offered to pay him an equivalent of 30ghc instead of the proposed 50ghc. The producer said that Psalm was not well known even though he had featured in a couple movies at the time.
He accepted and shot the movie but after the shoot, the producer was satisfied by the level of performance Psalm put up. Emmanuel Appea personally drove to Psalm’s house to congratulate him for the job and also apologized for the fact that he was cheated considering his performance.

According to Psalm, the producer assured him of bigger payments in their subsequent projects which never came to pass. After this Psalm was offered another job by Emmanuel and that was when he was invited to shoot ‘Taxi Driver’.

The taxi driver series was a situation comedy but is synonymous with a talk-show on wheels. This very versatile product was one of the most popular TV programs ever to hit our TV screens

T.T has made his mark in Ghana’s movie industry. With more than 20 years of acting experience under his belt, he is seen as a bridge between the old and new breed of actors.

Aside from his role on the Taxi Driver set, he also worked at Peace Fm. Unfortunately, when the TV series ended, he also lost his job at Peace FM.

After the Peace FM job got shelved and film roles were not pouring in all making life difficult but according to T.T, it was at this juncture that his wife listened to the counsel of friends and started misbehaving and not heeding his admonishing even deserting him so when a damsel appeared that she wanted him to coach her in acting as she desired to be a professional actress, an affair ensued leading to him relocating from Accra to Cape Coast to stay with her.

He narrates that following that damsel was one of his misguided steps in life as she proved to be a terror for his children birthed with his wife.

From stepping on his female daughter’s vulva with a heel to denying his son food, Psalm states he still begs his children for forgiveness for not keeping a keen eye on them in Cape Coast leading to their maltreatment at the hands of his lover.
Illness

Psalm Adjetefio has an enlarged heart, leading to poor pumping of the heart resulting in swollen feet according to his doctor, he said this in an interview before his death.

“Some of my organs have shifted position. I am sick but I have to act to earn some money,” he tells Deloris Frimpong Manso, the show host.

Given that he had been perching with a friend at East Legon for some time and has to move to Dodowa requiring GHS10,000 to settle at the new place; Actress and TV Presenter; Gloria Osei-Sarfo who turned a year older on Wednesday, April 4, 2018 decided to celebrate her special day with some special people including Mr. Adjetefio.

The ‘Efiewura’ actress on the day decided to surprise twelve veteran movie stars who paved the way for her; presenting a hamper filled with cloth, drinks, rice, oil, biscuits, washing powder and an undisclosed amount of money to each of them at their respective private residence.

Psalm Adjetefio disclosed that he would soon enroll in a seminary to become a full-time priest of the Anglican Church and that currently, he is preoccupied with spreading the word of God as a lay-preacher.

I'm Adwenpa-Hene |Blogger & Broadcaster Journalist. I am the CEO and manager of this noble website. I publish on Entertainment, Sports, Politics, Lifestyle, and Technology. You can also follow Us on : YouTube Channel - My Ghana Media TV, Facebook - MyghanaMedia TV , Twitter - @MyGhanamedia2 & Instagram - My Ghana Media TV. Email Address: [email protected] Contact Us: 0200818719
@@MyGhanamedia2
Previous Sir John To The Youth: Give Maximum Support To Consolidate Ghana’s Gains
Next Ghana Abstains As UN Votes To Suspend Russia From Human Rights Council