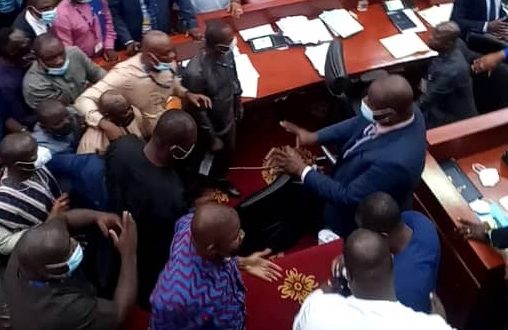 MPs shouted at each other and engaged in an open brawl in Parliament on Monday evening (20 December) as the First Deputy Speaker, Joseph Osei-Owusu, vacated his seat to enable him also to cast a vote to pass the controversial E-Levy under a certificate of urgency.

The Minority contended that, under the standing orders of Parliament, Osei-Owusu, who was presiding yesterday, could not vote. However, the sit-in Speaker insisted that he had the right to vote and would do so.

The free-for-all ensued on the Speaker’s platform as Minority MPs attempted to seize his chair as he made his way out of the chamber in order for the Second Deputy Speaker, Andrews Amoako Asiamah, to take over.

The marshals had a tough time restoring order in the House as they wrestled with a group of MPs to protect the Speaker’s seat, his documents and the mace.

See also  What Power Do You Have To Remove Adwoa Safo From Parliament? – Speaker Questions NPP

Watch the open fight below:

I'm Adwenpa-Hene |Blogger & Broadcaster Journalist. I am the CEO and manager of this noble website. I publish on Entertainment, Sports, Politics, Lifestyle, and Technology. You can also follow Us on : YouTube Channel - My Ghana Media TV, Facebook - MyghanaMedia TV , Twitter - @MyGhanamedia2 & Instagram - My Ghana Media TV. Email Address: [email protected] Contact Us: 0200818719
@@MyGhanamedia2
Previous Mercy Naa-Oyoo Quartey Writes: What You Have To Know About Exclusive Breastfeeding
Next Today’s Newspaper Headlines; Tuesday, 21st December, 2021