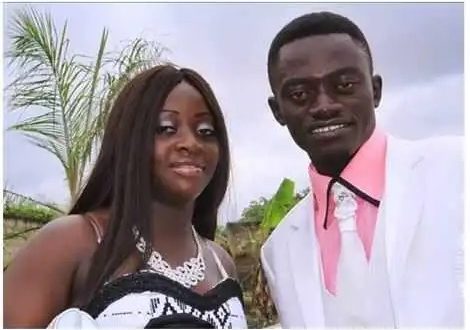 Patricia Afriyie, the former Girlfriend and baby Mama of Ghanaian Actor, Kojo Nkansah, popularly known as Lil Win,  has stated that she got pregnant by the actor just at age 14.

That was after she had dated the Actor for a short while.

Photos of the traditional wedding of Lil Win and his new wife, Maame Serwah surfaced on social media few days ago.

Just when the photos popped up, a section of the public criticised the Actor for snubbing Pat and making another woman his wife.

Right about the same time, it was rumored that Pat had allegedly gone insane over Lil Win’s marriage to the new wife.

In an interview, she explained that “I was 14 years when Lil Win and I started being intimate. He met me when I was 14 and we started dating. I was a class 6 student. I was in school till JHS 3 when I became pregnant. I was pregnant with my first child at that time.”

She continued, “Prior to that I got pregnant at age 14 and had a miscarriage. I gave birth to our firstborn at the age of 15. Then seven months later I got pregnant with the second born.”

Speaking about Lil Win’s marriage, Pat said she did not have any issue with the new wife.

Unfortunately, she accused Ghanaian Actress, Sandra Ababio of allegedly coming between her and Lil Win after she had given him two children.

According to Pat, she quit her education to support the Actor when he barely had ‘nothing’.

She expressed her disappointment in the Actor and as well felt jilted by him after the ‘sacrifices’ she and her mother made just for the Actor to sail through.

Below is a video: