Breaking News
Home / GENERAL NEWS / Video: Man Digs Own Grave, Buys Casket And Drinks For Guests Ahead Of His Funeral 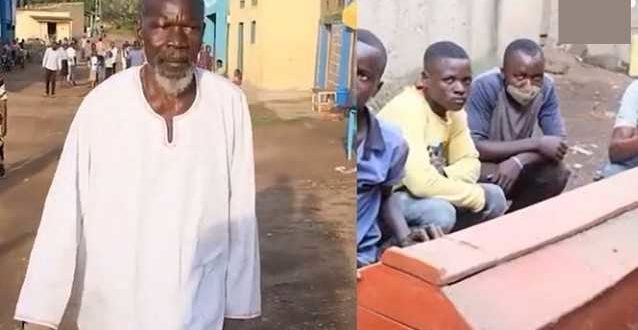 Video: Man Digs Own Grave, Buys Casket And Drinks For Guests Ahead Of His Funeral

A Rwandan man has been hailed for his thoughtfulness for making a detailed preparation ahead of his own funeral.

The 70-year-old Mr. Leo has made available every resource needed; from his grave to casket, clothes, venue and even drinks for guests, for his burial.

The reason, he said, is to relieve the burden of his family and to have his dream funeral, a condition he said will let him rest in peace.

According to him, he shudders at how members of his community find it difficult to bury their dead – and despite being married to nine wives who have produced multiple children – he feels that could also be his fate.

See also  CLOGSAG Calls Off Strike; Members Agree To Return To Work On May 16.

Interestingly, he has drawn out an elaborate plan of how he expects his funeral to be, as he said his instincts are alerting that he has fewer days remaining on earth.

He wants to be laid in state in a white Jalabiya and after he has been lowered to the ground, brinks and concrete – which he has already purchased – be used to secure his resting place.

Speaking on Afrimax English, he disclosed he has also paid pallbearers as well as labourers who will work on his grave.

The most shocking part about his funeral is that he wants to be buried by only men, which means, his wives and daughters are not invited.

Mr. Leo also made available enough drinks that will be used to entertain all the guests who would grace his anticipated burial afterparty.

Currently, all he does is to live for each day. Since he rolled out his burial preparation, every day is a merry-making one.

I'm Adwenpa-Hene |Blogger & Broadcaster Journalist. I am the CEO and manager of this noble website. I publish on Entertainment, Sports, Politics, Lifestyle, and Technology. You can also follow Us on : YouTube Channel - My Ghana Media TV, Facebook - MyghanaMedia TV , Twitter - @MyGhanamedia2 & Instagram - My Ghana Media TV. Email Address: [email protected] Contact Us: 0200818719
@@MyGhanamedia2
Previous DCOP Kwesi Ofori: We Will Investigate Barker-Vormawor’s Intention To Stage A Coup
Next Dr. Gideon Boako Discounted Reports That Dr. Bawumia’s Convoy Got Involved In An Accident